As a result of the deliberate shelling of the cemetery in Azerbaijan’s Tartar district by the Armenian armed forces, the number of those who died during the funeral procession reached four people, Trend reports on Oct. 15.

Despite the efforts of doctors, one of the wounded 53-year-old Iskandar Amirov died.

As a result of deliberate shelling of a cemetery in Azerbaijan’s Tartar district during a funeral procession, residents of the district 54-year-old Fizuli Mammadov, 52-year-old Nofel Amirov, 41-year-old Elsevar Allahverdiyev, 34-year-old Rafael Gazanfarli were severely wounded and were taken to the hospital. 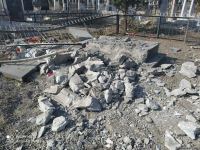