A press-conference of Eurovision-2012 German representative Roman Lob has been held in Baku Crystal Hall press-center. He will sing "Standing Still" song.

"Baku is a beautiful city," he said. "We spent a whole week here. On the second day of our stay we walked in the city, familiarized with the sights and tasted great Azerbaijani dishes. I especially liked the lamb shish kebab. There are very nice and kind people here."

The participants from Sweden, Denmark and Norway are the best at the contest, he said.

Finally, Eurovision-2010 winner Lena Meyer appeared at a press-conference and wished luck to her compatriot. Roman completed the meeting with media by performing an acoustic version of "Standing Still" song.

The singer's musical career began in 2006. Then he made an attempt to participate in the "DeutschlandsuchtdenSuperstar" contest, but due to problems with the vocal cords he was forced to leave the show. Later, he continued singing, becoming a participant of the alternative rock band "RooftopKingdom". Besides performing, he works as a mechanic. Roman is the winner of the German show "Our Star for Baku". 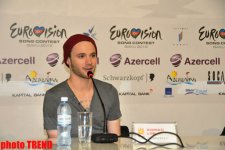