The Kharkov-Baku-Kharkov flight, opened with the support of the Kharkov Regional Organisation of the Congress of Azerbaijanis of Ukraine, to be operated by UTair-Ukraine airline, the organisation told Trend.

Speaking at the opening ceremony of the flight, state administration deputy head of the Kharkov region Andrey Mochenkov named this event as the next step in the development of friendly relations between Azerbaijan and the Ukraine.

It is of note that the Kharkov region is one of the largest industrial regions of Ukraine. It is also home to more than 30,000 Azerbaijanis.

Head of Marketing at UTair-Ukraine airline Vladimir Katerny informed the attendees about the company and said it is planned to increase the number of flights from Kharkov to Baku in the future. 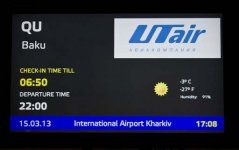