Organizers of the FIG World Cup in Trampoline Gymnastics, to be held in Baku, are obviously fully dedicated to preparations for the tournament, says Azerbaijani gymnast Ilya Grishunin.

The preparations for the Trampoline Gymnastics World Cup are on the schedule, he added speaking to Trend March 2.

"As for the expectations, I would like at least to be among the prizewinners," he said. "But in general, like all professional athletes, I wish to be a winner."

It is quite real to be a prizewinner, but it will be possible to draw some conclusions after the preliminary performances, according to the gymnast.

He noted that eminent athletes will participate at the World Cup.

"Strong athletes from Russia and Belarus, as well as the French athletes, who won Olympic licenses, will compete," said Grishunin.

"The organization level is very high. It is obvious that the organizers have put their hearts into this work. I hope everyone will enjoy," he added.

Athletes from Europe, Japan, Australia and the US are to participate in the event. 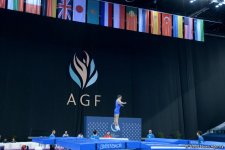