Rauf Aliyev, Azerbaijani MP and head of the Azerbaijan-Bulgaria Interparliamentary Friendship Group, took part in a commemoration ceremony dedicated to the 27th anniversary of the Khojaly genocide, Trend reports.

The ceremony was organized by the Embassy of Azerbaijan in Bulgaria. The event was attended by public and private structures, media representatives, diplomatic corps and other guests.

In order to better inform the Bulgarian public about the Khojaly genocide, a troupe of the Azerbaijan State Pantomime Theater showed the performance "Xocalı-bu olub" ("This was Khojaly") in Sofia. 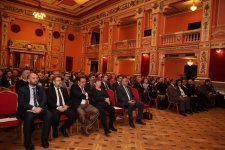