The ruins of the house of a resident of Azerbaijan’s Tartar city destroyed as a result of a missile strike by Armenian armed forces from the Smerch rocket system during the 44-day Second Karabakh War [from late Sept. to early Nov.2020], will be turned into a museum, the Karabakh bureau of Trend said.

The 62-year-old owner of the house, Sahib Ismayilov, reminded that his family members didn’t suffer that day only because they went out into the yard during the shelling.

"Fortunately, we went out into the courtyard, and after a while, a missile hit the house. The state built a new house for us, which is better than the previous one. I thank the country's leadership for this," Ismayilov said.

According to Jeyhun Ismayilov, a spokesman for the Barda Regional Department of Culture for the Tartar District, the ruins of the house would be turned into a museum.

"The fragments of 21 long-range missiles that were launched at Tartar, unexploded munitions, household items from other houses, photos will be exhibited here. Also at this place, it will be possible to get acquainted with the chronology of the terror committed by Armenia against Azerbaijan during the second Karabakh war," he noted.

Trend presents footage from Tartar as below. 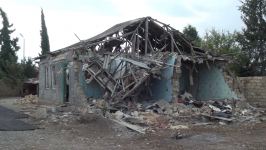