BAKU, Azerbaijan, May 24. Measures aimed at creating a military infrastructure that meets modern standards and increasing the combat readiness of units are being successfully continued on behalf of Azerbaijan’s President, Supreme Commander-in-Chief of the Armed Forces Ilham Aliyev, within the framework of reforms carried out in the Azerbaijani army, Trend reports with reference to the Ministry of Defense (MoD) of Azerbaijan.

MoD noted that Defense Minister Colonel-General Zakir Hasanov and the leadership of the ministry inspected the military infrastructure put into operation at Azerbaijan’s Garaheybat training center.

Hasanov was informed that for the practical application of modern combat methods, training grounds adapted to real conditions have been built here. In addition, classes are held at the center to improve the practical skills of military personnel in managing various types of military equipment and shooting in difficult terrain and weather conditions.

Hasanov watched the demonstration performances of cadets of the training course for extra-urgent active military service.

The Minister of Defense also visited the tank range. Hasanov was informed that methods for the effective use of tanks in populated areas are being worked out based on the experience gained in military operations during the Second Karabakh War.

Then an inspection of the military engineering center was carried out. It was noted that military personnel is provided with detailed information on various types of mines and ammunition in this center. Engineering means performing the tasks of detecting mines and unexploded ordnance, also their neutralization in compliance with safety rules.

The minister visited the command and observation post of the artillery battery after observing the training process of cadets on the obstacle course and the "scouting path". Cadets successfully completed the tasks of firing from artillery simulators.

Minister Hasanov inspected the progress of construction work carried out at military facilities in the center. 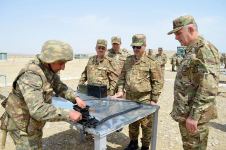