While delivering an opening speech, Sahil Karimli emphasized the significant achievements of the Turkic.World media platform over the year.

"The Azerbaijani media has entered the essential development stage through the efforts of Azerbaijan’s President Ilham Aliyev and First Lady Mehriban Aliyeva in this direction. Thus, young professionals’ interest in the media has significantly risen, the process of improving professional qualifications of staff is successfully continuing. Our primary goal is to convey the realities of Azerbaijan to the world, as well as protect the national interests of the country.

He talked about the information battle during the 44-day second Karabakh war, waged by President of Azerbaijan, Victorious Supreme Commander-in-Chief of the Armed Forces Ilham Aliyev.

"The president’s interviews with world leading media outlets during the war, defending Azerbaijan’s fair position, served as an example for all media representatives. It was also a road map for our future activities. As First Vice-President Mehriban Aliyeva said, the duty of each of us is to protect the country’s interests not only on the battlefield, but also in front of a computer monitor.

Karimli noted that all this poses serious and responsible tasks for media representatives.

"We’re jovial that the Turkic.World project has satisfied our expectations. Several authoritative media, as well as state bodies of the Turkic-speaking countries have joined the project in just a year. The media platform's activity in Azerbaijani, Turkish, Kyrgyz, Turkmen, Kazakh, Uzbek, English, as well as Russian languages ​​allows reaching a large readership and conveying our voice to the rest of the world."

Speaking at the event, Omar Karaca and Rufiz Hafizoglu underscored the achievements of Turkic.World media platform over the year.

Rufiz Hafizoglu added that the Turkic.World media platform was presented at the media forum of the Turkic Council in Istanbul in 2021, and also became a media partner of the 25th International Business Forum (IBF), organized in Baku by Azerbaijan's Small and Medium Business Development Agency (SMBDA) and the Independent Industrialists and Businessmen Association of Turkey (MUSIAD). Furthermore, Turkic.World is the official partner of TEKNOFEST International Aviation, Space and Technology Festival.

Emin Aliyev stressed that the special attention paid by President Ilham Aliyev and First Lady Mehriban Aliyeva to Azerbaijani media resulted in lots of international projects implemented by Trend News Agency. Thus, one of such projects was the Turkic.World media platform.

The Turkic.World media platform was launched in 2021 as a result of cooperation between Trend News Agency and Albayrak Media Group of Turkey with the support of Assistant of the President of the Republic of Azerbaijan, Head of Foreign Policy Affairs Department of the Presidential Administration Hikmat Hajiyev. 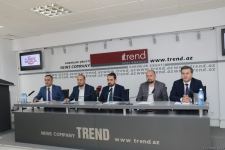