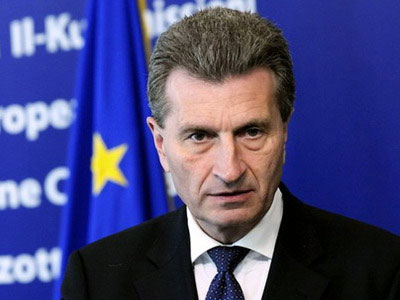 European Commissioner for Digital Economy and Society Gunther Oettinger intends to hold a meeting at the ministerial level with six Eastern Partnership countries in the beginning of autumn, said the message from the EU Delegation to Ukraine.

Oettinger plans to meet with ministers of Azerbaijan, Belarus, Armenia, Georgia, Moldova and Ukraine to continue discussing the idea of creating a digital community, according to the message.

Relations between Azerbaijan and the EU are regulated based on the Partnership and Cooperation Agreement which was signed in 1996 in Luxemburg and entered into force in 1999.

Currently, the EU is the main trade partner of Azerbaijan.

European countries accounted for 46.96 percent of Azerbaijan’s foreign trade in 2015, according to the State Customs Committee.

Currently, the EU countries account for 31.92 percent and 59.1 percent of Azerbaijan’s import and export, respectively. European countries primarily supply machinery and transport equipment to Azerbaijan and import oil products from the country.

Azerbaijan has initiated signing a strategic modernized partnership agreement with the EU instead of the association agreement. It is not a legal document, but a program, or an action plan aimed at expanding the cooperation with the EU beyond the energy sphere. The agreement will determine the new areas of partnership such as education and so on.