BAKU, Azerbaijan, July 19. Lithuania supports doubling the volumes of gas supply from Azerbaijan to Europe, chairman of the working group on Lithuanian-Azerbaijani inter-parliamentary relations of the Seimas (parliament) of the Republic of Lithuania Kazys Starkevichius, who was on a visit to Baku, said in an exclusive interview with Trend.

" We held eight meetings during the visit to Azerbaijan. The situation in the world, the post-conflict situation in the South Caucasus, Azerbaijan’s role in ensuring Europe’s energy security, as well as cooperation in the sphere of science, industry and agriculture were among the main topics of discussions. We talked about cooperation between the EU and Azerbaijan in the energy sphere in the context of the Eastern Partnership program. We support doubling gas supplies from Azerbaijan to EU. In this regard, there are prospects for cooperation between the ports of Lithuania and Azerbaijan. They should be connected via the transport system. In particular, the Klaipeda port has a liquified natural gas terminal. Azerbaijan can deliver gas to this port, wherefrom we can send it to other European countries. Lithuania is ready to start buying Azerbaijani gas right now,” said Starkevichius.

He went on to add that Lithuania pays great attention to development of renewables, in particular, solar energy.

“Lithuania has a solar battery production plant and its products are competitive with that of China. We can jointly with Azerbaijani partners build such a plant in your country as well. During the discussions we also talked about the participation of Lithuanian companies in the process of creating a “green zone” in Karabakh. Moreover, Lithuanian companies can take part in the projects in such spheres as construction, energy and agriculture in Karabakh. Our companies may implement their projects in industrial parks in this region,” Starkevichius explained.

He also talked about the prospects for bilateral cooperation in the sphere of transport.

“Lithuania is a major player in Europe’s transport system. EU is now reconsidering the principles of operation of the whole transport system and there are plans to establish connections, including railway connections between Europe and Asia, where Azerbaijan can also play its role,” said Starkevichius.

He noted that there are great opportunities for collaboration in agriculture as well.

“We can process fruits and vegetables from Azerbaijan and supply them to Europe. Partnership between Lithuania and Azerbaijan is very important for the economy of both countries,” Starkevichius concluded. 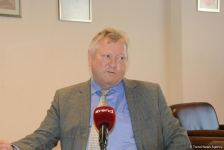