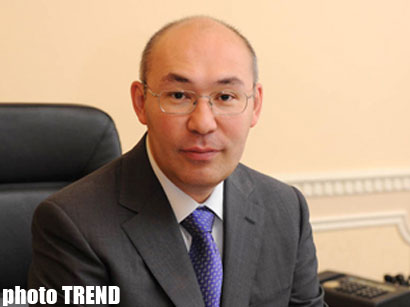 A Kazakh delegation headed by Deputy Prime Minister Kairat Kelimbetov attended the opening ceremony of the Kazakh Pavilion at the World Exhibition "EXPO-2012" in the city of Yeosu.

The subject of EXPO 2012 is "The Living Ocean and Coast)" uncovers the basic content of the exhibition - the importance of water in the life of humanity.

Much attention was paid to opportunities of Astana and Kazakhstan in the context of the promotion of "EXPO-2017".

After the opening of the Kazakh exposition Kairat Kelimbetov, as Chairman of the Organizing Committee to promote Astana's application, visited the pavilions of Belgium, Russia and other countries and met with the Commissioner "EXPO-2012" Lee Joon-hee. He congratulated the host country with the opening of "EXPO-2012" and stressed the high level of organization of the exhibition.

Kelimbetov attended a reception hosted by the country's President Lee Myung-bak and the official opening ceremony of the international exhibition. The Kazakh delegation included Executive Secretary of the MFA, the National Coordinator of "EXPO-2017" R. Zhoshybayev, Kazakh Ambassador to the Republic of Korea D.Bakishev and Chairman of the Trade Committee of the Ministry of economic development and trade of the Republic of Kazakhstan.

During his stay in South Korea Kelimbetov held talks with Chairman of Korea International Trade Association (ex-Prime Minister) Han Duck-soo, Minister of Commerce Park Tae-Ho and the management of the company "Samsung", during which they discussed issues of trade and economic relations between the two countries, activity of Korea within the Organization for Economic Cooperation and Development (OECD) and the prospects of Astana to hold the exhibition "EXPO-2017".
National Day of Kazakhstan will be held on July 28 with the participation of a representative delegation on the basis of the exposition of Kazakh pavilion.

"EXPO-2012" pavilions will run from May 12 to Aug.12. The organizers expect that the exhibition will be visited by more than 8 million people this year.