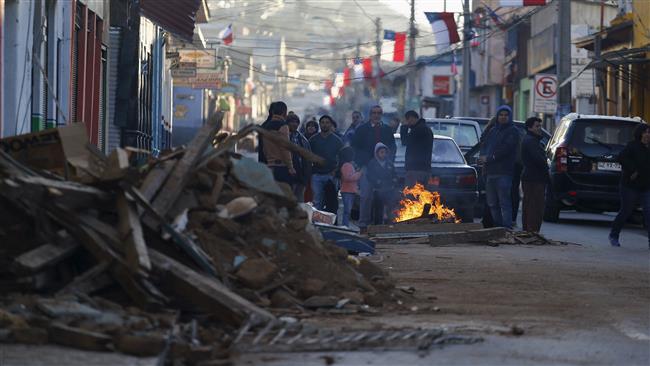 The second curfew over the past 24 hours has been imposed in Santiago as the death toll from riots rose to four amid growing public unrest caused by heightened subway fares, the special presidential appointee for the national defence during the state of emergency, Javier Iturriaga, announced in a statement on Sunday, Trend reports citing Sputnik.

"First of all, we do this to protect people's lives. This is not an action against the citizens, these are not restrictions for the sake of restrictions ... I hope that starting from 7 p.m. [22:00 GMT], everything will be calm and we all will be home," Iturriaga said in a broadcast, streamed by the 24 Horas channel, when asked to confirm the new curfew.

The curfew will reportedly end at 6 a.m. Monday [9:00 GMT]. The first curfew was imposed on Saturday from 10 p.m. - 7 a.m. local time in the provinces of Santiago and Chacabuco, as well as in the municipalities of Puente Alto and San Bernardo.

Earlier in the day, the Chilean authorities confirmed that the riots had already left four people killed and more than 200 injured, while over 700 were detained by police for robbery, looting and other serious crimes.

Chile has been marred in public unrest since October 6, when the authorities increased subway fares. What started as peaceful public demonstrations, grew into violent rallies, clashes with law enforcement and public unrest. On Friday, the violence peaked as protesters burned several subway stations as well as buses, office buildings and supermarkets. The Santiago subway was closed for the weekend. The curfew also caused severe disruptions to the air traffic to and from Santiago.

The increasingly violent nature of the public riots forced the authorities to declare a state of emergency in the provinces of Santiago and Chacabuco, as well as in the municipalities of Puente Alto and San Bernardo on Saturday.