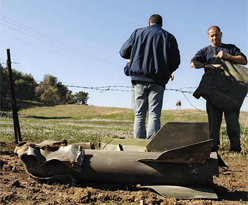 Israel is scheduled to Sunday deploy its Iron Dome rocket defence system in the south of the country, for the first time since it was developed.

A military spokeswoman in Tel Aviv told the German Press Agency dpa the battery would be deployed outside the desert city of Beersheba at 1 pm (1100 GMT).

The move comes after more than a week of escalating tit-for-tat violence in and near the Gaza Strip, with Palestinians firing rockets and mortars and Israel retaliating with air and artillery strikes.

It also follows after armed groups in Gaza agreed Saturday to cease rocket and mortar attacks if the Israeli military stopped attacking the coastal enclave.

Rafael Advanced Defence Systems Ltd, which developed the Iron Dome system, says it can intercept rockets and 155 millimetre artillery shells with ranges of up to 70 kilometres "within seconds."

Israel defined the deployment as an "operational test," because the truck-mounted system's effectivity is still "limited."

Israel Radio said it was mainly aimed at calming the public.

Last week, several Grad missiles landed in Beersheba, which is known as the capital of the southern Israeli Negev desert and has a population of some 200,000.

Schools were scheduled to reopen Sunday for the first time in days.

The decision by Palestinian factions to suspend attacks was made at a two-hour meeting at a Gaza City hotel, initiated by the Hamas, the movement which rules the Gaza Strip.

The secular Fatah party of Palestinian President Mahmoud Abbas, which is entangled in a bitter rivalry with Hamas, did not participate.

Since March 19, more than 90 rockets and mortars have landed in Israel.