Maradona hints at quitting after knock-out by Germany 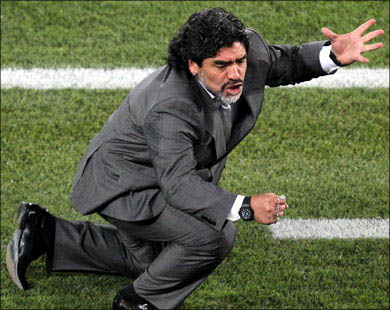 Diego Maradona strongly hinted he was stepping down as Argentina's national football team coach after their 4-0 whipping by Germany in a World Cup quarter-final match on Saturday, dpa reported.

"I have to discuss it first with my family and the players," said Maradona, who won the World Cup as a player in 1986.

"I'm going to be 50 on October 30, and this is the hardest thing I've had to go thorough because I'm in front of so many good players and good people.

"It's like a knock-out punch from Muhammad Ali, and I don't have the strength to do anything. It wasn't the ending we'd hoped for, but I believe that whoever comes in next will have to continue on the same path because it's the path the Argentines want."

One of football's all-time greats, Maradona took over as Argentina's coach at the end of October 2008. His team qualified for the World Cup finals in South Africa with difficulty but were undefeated and had played impressively until Saturday's debacle.