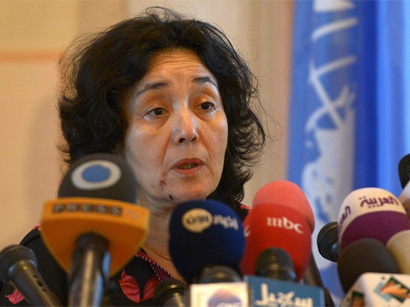 A top UN envoy has warned officials and anti-government fighters in Syria risk prosecution as war criminals for atrocities against the children, Al Jazeera reported.

Leila Zerrougui, special representative of the Secretary-General for Children and Armed Conflict, said on Monday she was "overwhelmed" by the suffering of children during a recent visit to Syria.

"Officials and rebel commanders alike risk prosecution as war criminals for atrocities against minors," she said, adding, " I met parents whose children were killed in bombings, children who saw siblings die in front of them and teenagers who had fought with armed opposition groups."

The UN official visited both Syria and neighbouring countries that are hosting hundreds of thousands of refugees from the civil war.

Zerrougui said one of her main goals during her visit was to make clear to both sides that the UN is keeping track of atrocities and that perpetrators would not escape persecution.

"One day Syria will come to peace, and those committing the atrocities will have to face, I hope, justice," she said.

Around 7,000 children under the age of 15 have been killed during Syria's more than two-year-old conflict.

Half of the 1.7 million Syrian refugees are children, and within the country over 3 million children are in desperate need of humanitarian aid.

A recent UN report placed the main rebel umbrella group, the Free Syrian Army (FSA), on its "list of shame" for recruiting child soldiers even as FSA leadership has acknowledged the problem and sent Zerrougui a letter asking for guidance on how to get off the list.

Zerrougui said most commanders on the ground denied recruiting children and insisted everyone in their ranks was at least 18.

Syrian government forces were added to the list for detaining minors and often torturing and sexually assaulting them even as the government of President Bashar Assad has passed a law prohibiting child soldier recruitment.

"Syrian authorities continue detaining children on security charges or because their families are suspects of sympathizing with the opposition," she said.

Russia and China are working on virus vaccine
Russia 14:12

Chinese students return to virus quarantine in Singapore
Other News 14:05