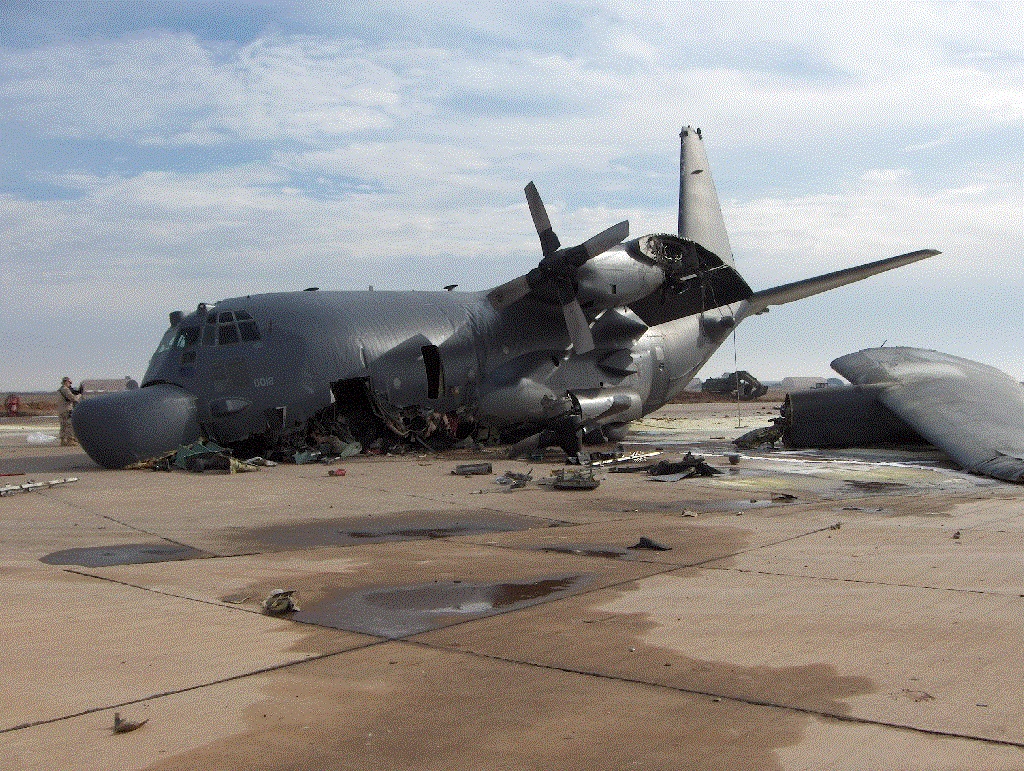 A WC-130 Hercules military cargo plane crashed and burst into flames Wednesday shortly after takeoff at a Georgia airport, killing at least five of the nine people aboard, US Air Force officials told Fox News.

The Puerto Rico Air National Guard plane crashed just before 11:30 a.m., shortly after takeoff from Savannah/Hilton Head International Airport, the Savannah Air National Guard said. The plane was bound for Davis-Monthan Air Force Base in Arizona and on a training mission when it went down.

“There has been a plane crash at the intersection of Hwy 21 at Crossgate Rd. Roads will be shut down. Please avoid the area,” Chatham EMA tweeted shortly after the incident.

Photos from the ground showed a section of the plane engulfed by fire and thick black smoke billowing to the sky. Only the tail section of the aircraft was intact.

Mark Jones told Savannah Morning News he was near the highway when he noticed a plane flying dangerously low.

“I could see [the plane] above the tree line and it looked kind of low like it was curving in toward street, but I see them all the time, so I didn’t think anything of it,” Jones said. “I looked down and then looked back up and it didn’t look like it nosedived, but it almost looked like it stalled and just went almost flat right there in the middle of the highway.”

Jones said he saw an explosion and believed the plane could have landed on cars driving on the road.

“There were definitely cars going both ways," he said "...Most people stopped and got out of their cars.”

But Gina Bilbo, spokesperson for the Effingham County Sheriff's Office, said at a news conference Wednesday afternoon that "as far as we know there were no cars hit in this crash.

"It is an absolute miracle," she said.

Firefighters put out the blaze but were still using a mixture of water and foam to take care of any remaining hot spots.

It’s unclear exactly what caused the crash. The Savannah Air National Guard said a board of officers will investigate the incident.

President Trump tweeted that he had been briefed on the crash and asked for "thoughts and prayers for the victims, their families and the great men and women of the National Guard."

Puerto Rico Gov. Ricardo Rossello tweeted that his thoughts are with those impacted by the crash, and that they'll receive support from the Puerto Rico National Guard.

Savannah/Hilton Head International Airport said flights were being impacted by the plane crash and urged travelers to check with airlines regarding their flights. Meanwhile, Highway 21 will remain closed "indefinitely," according to officials.

A WC-130 is a weather reconnaissance aircraft used by the Air Force and Air National Guard. Typically an Air Force plane like this has a crew of five, with room for dozens of passengers or cargo.

In the past month, eight US military non-combat aviation crashes have killed at least 12 service members. Top Marine Corps and Navy officers at the Pentagon on Wednesday said budget cuts over the past decade were partially to blame for the spate of training crashes.