The opening ceremony of the Baku International Tourism Film Festival (BITFF) has taken place at the Nizami Movie Center on November 20. Guided by its objectives to promote films that can stimulate the development of domestic and international tourism, present the best screen works and encourage the authors, this Festival is sponsored by Nar Mobile operator that attaches a particular importance to the promotion of the Azerbaijani culture and the development of national movie industry.

In the framework of this cultural event which is destined to support films screened during the Festival and to bring them to a wider international audience, it is also planned to announce the relevant contest of films and give awards to the films that reflect various fields of tourism in the best professional way.

Winners that will be offered diplomas and money prizes will be selected among the authors of films which are screened in 7 categories (such as country-region-city, culture-traditions, extreme tourism, environmental tourism, TV products, ad films and national films). Films will be evaluated by international jury panel composed of 7 members comprising cinema professionals, media, travel and tourism experts.

The Garant Holding is the official sponsor while Nar Mobile is a sponsor of this Festival which is held with the support of the Ministry of Culture and Tourism of the Republic of Azerbaijan and will last till November 24. 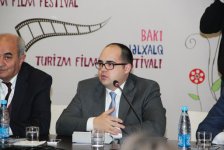