Baku 2015 : EUROGAMES Materials 6 May 2015 14:31 (UTC +04:00)
Azerbaijan, as a country with an indescribable landscape, may surprise the Europeans, who will personally get acquainted with it during holding the first European Games in Baku 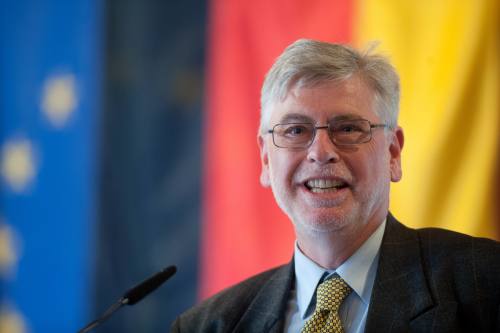 Azerbaijan, as a country with an indescribable landscape, may surprise the Europeans, who will personally get acquainted with it during holding the first European Games in Baku, editor in chief of the oldest German newspaper Thuringer Allgemeine Paul-Joseph Rau told Trend during the European Newspaper Congress held in Vienna.

The event, which drew more than 500 media professionals from 35 countries to discuss the latest developments in the industry, is held with the support of the Japan Tobacco International (JTI) company.

"This event is very important for the future of Azerbaijan, for the formation of the image of such a small country as Azerbaijan, particularly in Europe," said Rau. "In addition, the important point is that Azerbaijan is at the crossroads of Europe and Asia, but mostly your country is closer to Europe. In overall, holding such large-scale sports like the European Games in the country has a positive impact on the economy, the development of tourism."

Such activities are important for all countries, and all the more for Azerbaijan, because of all the three South Caucasian countries, Azerbaijan, despite the conflict with Armenia, is the most progressive one.

The German news agencies will cover European Games, according to Rau, who is a big fan of football. "Four years ago, I traveled to the southern regions of Azerbaijan as part of a tour on the South Caucasus within a large delegation and was struck by the beauty of nature," said Rau, expressed his admiration for the entire country, particularly the capital of Azerbaijan, which in some ways resembles Paris. "It was fantastic."

"When I walk in Baku, its streets remind me of Paris and New York," said Rau.

The German delegation did not like Armenia, which is the poorest of all three countries, and in Georgia the situation was unstable at that time, Rau said.

Holding the European Games in Azerbaijan will bring the country even greater dividends from both economic and political point of view, he said.

The editor in chief of the German newspaper, touching upon IV Islamic Solidarity Games, which will be held in Baku in 2017, mentioned the importance of holding Islamic competitions precisely in such a modern country like Azerbaijan. "I'm going to surely take part in these Games as a fan," he said.