"The OSCE/ODIHR refused from observing the election in Azerbaijan," he said. "We think this organization sees the speck in other's eye but fails to notice the beam in its own eye."

He added that tension is observed on the international platforms against Azerbaijan and Russia.

"The parliamentary election has been well organized in Azerbaijan, and the OSCE/ODIHR is well aware of this," Slutsky said. "The overseas instructors advised them not to go to Azerbaijan because they knew there won't be any negativity."

He said that the refusal to come proves this organization has has exhausted itself if it has agreed to be a puppet in the hands of others. Slutsky added that such actions absolutely do not correspond to the main tasks of the OSCE/ODIHR.

"The OSCE/ODIHR's refusal will not affect the image of Azerbaijan, the country's prosperous economy," Slutsky said, adding that the country has done much for over 20 years, including improvement of the electoral practice.

"We have visited the polling station in the building of the Academy of Public Administration, and it has all the necessary conditions for voters and observers," he said. "We're very pleased, all the details have been taken into account."

He said that the mission representatives met with those of all parties participating in the election and made preliminary conclusions.

Slutsky also noted that all the talk about the alleged mass violations of democracy in Azerbaijan are false. 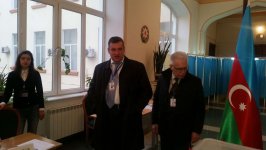