Azerbaijan`s First Lady said built on the foundations of friendship and fraternity, the relations between Azerbaijan and Turkey covered all spheres.

Mehriban Aliyeva stressed the contribution of the Heydar Aliyev Foundation to developing the relations between the two countries, adding the Foundation carries out a number of successful projects jointly with the Turkish government.

Ambassador Alper Coskun assured the First Lady that he would try his best for deepening friendly and fraternal Azerbaijan-Turkey relations during his tenure in Baku.

They discussed the projects to be held in collaboration with the Heydar Aliyev Foundation. The Azerbaijani First Lady and the Turkish Ambassador also stressed the importance of cooperation with Turkish foundations.

The First lady recalled her meeting with Dominique de Villepin in Paris.

Mehriban Aliyeva hailed relations between the two countries as excellent, noting the launch of Azerbaijan`s first communications satellite with the assistance of a French company was a vivid manifestation of this.

"The events as part of this project are held throughout France."

The First Lady praised the fact that the number of positive news articles about Azerbaijan was increasing in the French media.

On cooperation in educational sphere, Mehriban Aliyeva praised the construction of a French school in Baku at the initiative of the Heydar Aliyev Foundation.

He noted that holding the 1st European Games in Baku testified to increasing image of Azerbaijan.

Mehriban Aliyeva on Monday also held another meeting - with the Hungarian Ambassador to the country Zsolt Chutora.

On the bases of friendship relations, Mehriban Aliyeva noted that there were great potential for development of cooperation in all spheres between the two countries.

Mehriban Aliyeva said the negotiations on realization of joint projects were underway with Hungarian Government.

Mehriban Aliyeva added that according to these projects, the rehabilitation centre for persons with physical disabilities would be constructed in Hungary.

They expressed satisfaction on realization of such projects in Hungary as well.

Mehriban Aliyeva said cooperation between the Heydar Aliyev Foundation and UNDP started in 2005. Azerbaijan`s First Lady highlighted projects implemented by the Heydar Aliyev Foundation, saying the largest one was "Project on assurance of access of the blind and visually impaired persons to ICT". Mehriban Aliyeva pointed out that under the project, ICT centers and facilities had been constructed in Baku and regions for the people who are blind or visually impaired.

She also briefed Antonius Broek on environment and culture projects.

Azerbaijan`s First Lady expressed confidence that activities on this direction would be boosted in the future.

Antonius Broek congratulated First Lady on the occasion of launch of Azerbaijan`s communications satellite into orbit, describing it as a "great achievement".

UN Resident Coordinator said his organization was open to proposals over continuation of the above mentioned projects.

Mehriban Aliyeva and Antonius Broek stressed importance of continuing projects by Heydar Aliyev Foundation and UNDP on impaired persons in this year, too.

They proposed to expand activities in the fields of environment and ICT as 2013 was declared "Year of the Information and Communication Technologies" in Azerbaijan. 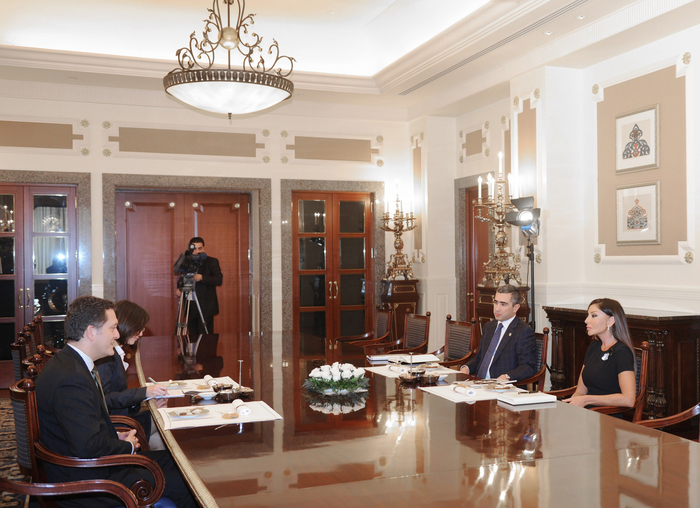