Head of CIS observation mission: All conditions created for voters in Azerbaijan (PHOTO) 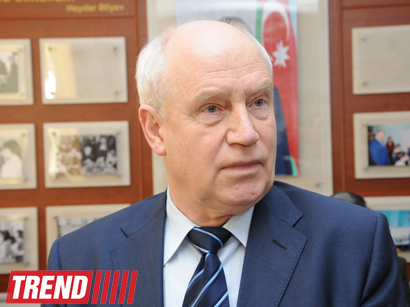 The election campaign in Azerbaijan runs quite peacefully, head of the CIS observation mission the Chairman of the Executive Committee, the CIS Executive Secretary Sergey Lebedev told journalists on Wednesday.

"All conditions are created for voters to express their right to vote," Lebedev said.

According to him, since early morning observers from the CIS countries have visited a number of polling stations, and went to the regions of the country.

"Most of the stations are equipped with webcams. Conditions are created for elderly voters as well as for those who are unable to arrive at a station for health reasons," Lebedev said.

According to observers from the CIS countries, technical equipment of the stations in Azerbaijan is flawless.

Head of the CIS Mission visited several polling stations of Baku, including 23, 24, 25 of third Yasamal constituency #17.
The presidential election voting started in Azerbaijan on Wednesday. Country's polling stations opened at 8:00 am and will close at 7:00 pm (local time).