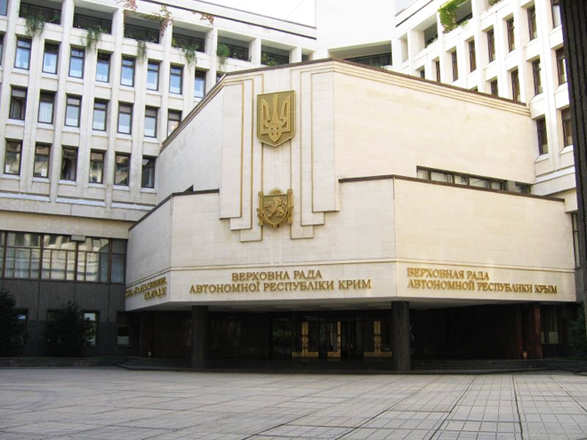 A draft decree on disbanding Ukrainian military units in Crimea maintaining neutrality with respect to the Crimean government has been worked out in the administration of Ukraine's acting President, Oleksandr Turchynov who was appointed by the Verkhovna Rada (parliament), a source in the Ukrainian government said on March 15, RIA Novosti reported.

"Twelve military units of the Ukrainian army and fleet, which haven't gone across to the Crimean authorities are likely to be disbanded and after the re-attestation, the personnel will be sent to western regions for staffing of the units. The decree will be apparently signed on March 17," the source said.

Re-attestation will be a prerequisite for the Crimean servicemen who decided to continue their service in the Armed Forces of Ukraine, the source said. However, they will not have the right to go into service in Ukraine's Ministry of Internal Affairs and the National Guard.
It was earlier reported that the Ukrainian leadership does not consider the Crimean garrisons as a real force capable of obeying Kiev's orders. Acting Defense Minister, Igor Tenyukh reported at a closed meeting of the government that many commanders of Ukrainian garrisons in Crimea do not obey the orders from the center and have actually resigned. The protest inspiration is accelerated among the personnel, therefore it was decided not to bring the units of Ukrainian Armed Forces in Crimea to the state of combat readiness in connection with the exercises.

Change of power took place in Ukraine on Feb.22 which has signs of a coup. Rada ousted President Viktor Yanukovych from the power, changed the constitution, entrusted the duties of the president to Speaker Oleksandr Turchynov and scheduled elections for May 25. Yanukovych said that he was forced to leave Ukraine under the threat of physical violence and remains the legally elected head of state. Moscow believes that the legitimacy of the decisions of the Ukraine's Verkhovna Rada is doubtful. A number of provinces in eastern and southern Ukraine, as well as the Crimea did not recognize the legitimacy of Rada's decisions and decided to hold a referendum on the future of their regions.

The referendum on Crimea's status has been scheduled for March 16.

Canada to provide families of Ukraine plane crash victims $25,000 for each who Died – Trudeau
Other News 17 January 21:32