Politics Materials 29 September 2014 14:34 (UTC +04:00)
Russian President Vladimir Putin arrived in Astrakhan Sept. 29, where he will take part in the summit of the Caspian littoral states 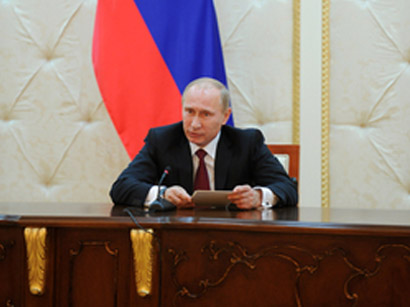 Following the summit, it is expected to ink several documents, including a political statement, which is to become a foundation for the future convention on the Caspian Sea's legal status.

The heads of the Caspian states will discuss the "joint management of the Caspian Sea, and creation of a modern legal regime of the water reservoir", Russian presidential aide Yury Ushakov said ahead of the meeting.

The Caspian states' heads will have one-on-one and expanded meetings.

They will also take part in a ceremony for signing several five-sided documents, and make a press statement.

After the official program the heads of states will go for a walk along the embankment of the Volga River and will attend a ceremony of releasing young sturgeons there.

President Putin will also have bilateral meetings including with the presidents of Iran, Azerbaijan and Turkmenistan.