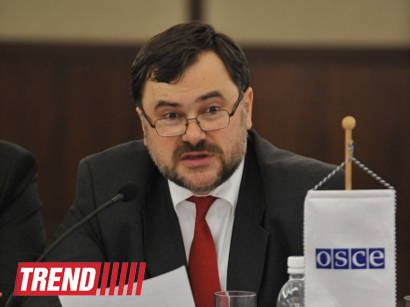 Justice Minister of Azerbaijan, Chairman of the Judicial and Legal Council Fikret Mammadov met with OSCE Project Coordinator in Baku Alexis Chahtahtinsky, said the press service of the Azerbaijani Ministry of Justice Dec.11.

During the meeting, the minister said that Azerbaijan and OSCE have fruitful relations, the message reported.

He mentioned the comprehensive development of Azerbaijan under the leadership of President Ilham Aliyev, including the judicial system of the country.

Mammadov also briefed the guest on the improvement of the judicial system, increase of the number of judges, reforms in the justice sector, including the prison system. He said that the OSCE is actively involved in the reforms, in particular in the field of judicial training.

In turn, the OSCE representative said he was satisfied with his activities in the country, and he highlighted the dynamic development of Azerbaijan and increase of its authority on the world stage.

Chahtahtinsky praised the progressive reforms in Azerbaijan, including the activities of the ASAN service centers, and he said that population is promptly provided with such required services only in a few countries on the OSCE area.

At the meeting the sides exchanged views on issues of mutual interest, including the improvement of legislation, increasing potential of the Academy of Justice and so on.