President of the Republic of Azerbaijan Ilham Aliyev has received a delegation led by Chairman of the Committee of Ministers of the Council of Europe, Deputy Prime Minister, Minister of Foreign Affairs, Foreign Trade and Development Cooperation of the Kingdom of Belgium Didier Reynders.

During the meeting, the sides expressed satisfaction with the development of bilateral relations between the Republic of Azerbaijan and the Kingdom of Belgium, and noted that there is mutual interest in expanding cooperation.

The successful operation of Belgian companies in Azerbaijan was stressed. It was noted that the visit of the delegation led by Didier Reynders to Azerbaijan created good opportunity for discussing the issues related to prospects for cooperation between the two countries.

During the conversation, the parties exchanged views on non-oil sector, culture, simplification of the procedures for issuing visas, Azerbaijan-European Union cooperation and other issues. 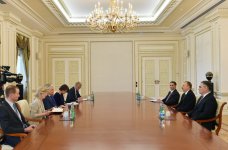