Azerbaijan's First Vice President Mehriban Aliyeva has attended opening of a new building built for the No.9 nursery-kindergarten of sanatorium type in Mashtaga settlement of Sabunchu district at the initiative of the Heydar Aliyev Foundation.

The First Vice-President cut the ribbon symbolizing the opening of the building, and toured it.

The construction of the two-storey building of the kindergarten started in September, 2014. The kindergarten will accommodate up to 120 children aged from 2 to 6 in 6 groups, including 5 Azerbaijani language and one Russian language groups. 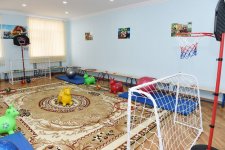