The protocol of intent signed between the Ministry of defense industry of Azerbaijan and the Israeli "Aeronautics" company on the organization of joint production of a new type of unmanned systems is a very successful deal, former Israeli consul in Moscow, former adviser to the Minister of internal security of Israel, military-political commentator Alex Wexler told STMEGI, news website of Mountain Jews.

"This is a very successful deal between Israel and Azerbaijan. Israeli drones are very effective. And our very good and trustful relations with Azerbaijan contribute to the fact that we share our new technologies and weapons with our friend. Azerbaijan is our friend, and has been for a long period of time. And there is no doubt that our relations with Azerbaijan will continue to develop in the military area as well," the former advisor to the minister said.

"There are drones for civil and military purposes. We try to supply military drones only to the countries which are friendly to Israel. They are in great demand on the world arms market. Every year interest in our drones increases," said the former adviser to the minister.

The successful activity of the "AZAD Systems" joint venture, specialized in the production of various types of unmanned aerial vehicles in Azerbaijan, based on the implementation of a joint project between the Ministry of defense industry and the "Aeronautics" company was discussed during the meeting.

The Ministry of defence industry and Aeronautics company signed a protocol of intent on joint production of new types of unmanned systems. 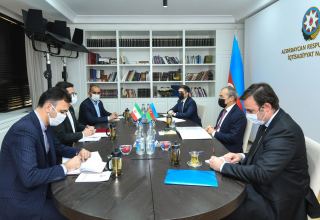