FM: Azerbaijan - a country with highest number of IDPs, refugees per capita

Politics Materials 26 February 2019 21:59 (UTC +04:00)
Azerbaijan, with a population of almost 10 million people, is a country with the largest number of IDPs and refugees per capita, Azerbaijani Foreign Minister Elmar Mammadyarov said at the 40th Session of the UN Human Rights Council. 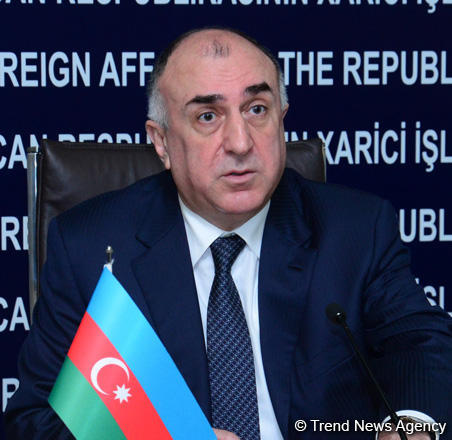 Azerbaijan, with a population of almost 10 million people, is a country with the largest number of IDPs and refugees per capita, Azerbaijani Foreign Minister Elmar Mammadyarov said at the 40th Session of the UN Human Rights Council, Trend reports referring to the Foreign Ministry of Azerbaijan.

The minister stressed that unfortunately the ongoing armed conflict between Armenia and Azerbaijan still represents a major threat to international and regional peace and security, human rights and development.

"Today, Azerbaijan marks the 27th anniversary of one of the brutal pages of this conflict – the Khojaly Genocide committed by Armenia, as a result of which 613 residents of this small town in the Nagorno-Karabakh region of Azerbaijan, including 106 women, 63 children and 70 elderly were murdered by Armenian military in 1992," the minister said.

"As a result of the armed aggression by neighboring Armenia, 20 percent of the territory of Azerbaijan has been under occupation since 1992. Over 1 million Azerbaijanis, subjected to ethnic cleansing, remain forcefully displaced from their native lands, which in per capita terms makes it one of the highest numbers of IDPs and refugees in the world with a country of 10 million. Armenia continues the occupation of Azerbaijani territories by disregarding the UN Security Council resolutions 822, 853, 874 and 884 and related documents of many other international organizations, which firmly reaffirm the territorial integrity of Azerbaijan and demand immediate, complete and unconditional withdrawal of Armenian armed forces from the occupied territories of Azerbaijan."

"In this context, I urge the UN Human Rights Council, its mandate holders and the UN High Commissioner for Human Rights to take a principled stance and efficient actions for administration of justice and restoration of human rights of Azerbaijani IDPs and refugees, violated or more than two decades."

"Azerbaijan believes in importance of multilateral institutions for promotion and protection of human rights around the world. Therefore, Azerbaijan attaches importance to the UN Human Rights Council mandated to promote and protect all human rights through cooperation and genuine dialogue," Mammadyarov said.

"At a time when human rights challenges, in particular forceful displacement of millions of people and racial and other forms of discrimination are on the rise globally, the role of the Office of the High Commissioner for Human Rights with principal responsibility for promotion and protection of all human rights has become even more crucial," he added.

The minister noted that while being an observer to the Council, Azerbaijan actively contributes to its work.

"At the 37th session of the Council, Azerbaijan together with Georgia, Kenya, Thailand and Turkey submitted a draft resolution co-sponsored by 92 states on promoting human rights and SDGs through transparent, accountable and efficient public services delivery, which was unanimously adopted by the Council. This year, Azerbaijan in cooperation with the OHCHR will host a follow-up international conference, where countries with effective models of public services can share their best practices with other Member States as encouraged by the above-mentioned resolution," Mammadyarov said.

He noted that the Azerbaijani Government continues to carry out large-scale programs to ensure that Azerbaijani citizens fully enjoy all human rights and fundamental freedoms.

"In this regard, I would like to highlight the recently adopted State Program on the Development of Justice in 2019-2023, which is aimed at further legislative and structural measures to improve performance of judiciary," the minister said.

Mammadyarov reminded that in October 2019 Azerbaijan will host the 18th Summit of Heads of State and Government of the Non-Aligned Movement, where Azerbaijan will take over the presidency of the Movement.

"We are convinced that the presidency of Azerbaijan will provide another impetus for advancing the founding principles of the Movement, the 65th anniversary of which will be celebrated in 2020, across many UN platforms, including the Human Rights Council. I take this opportunity to reaffirm my country's commitment to the Non-Aligned Movement endeavors," he said.