Politics Materials 26 November 2019 16:38
President of the Republic of Azerbaijan Ilham Aliyev has received a delegation led by Chief of the General Staff of the Armed Forces of the Russian Federation Valery Gerasimov 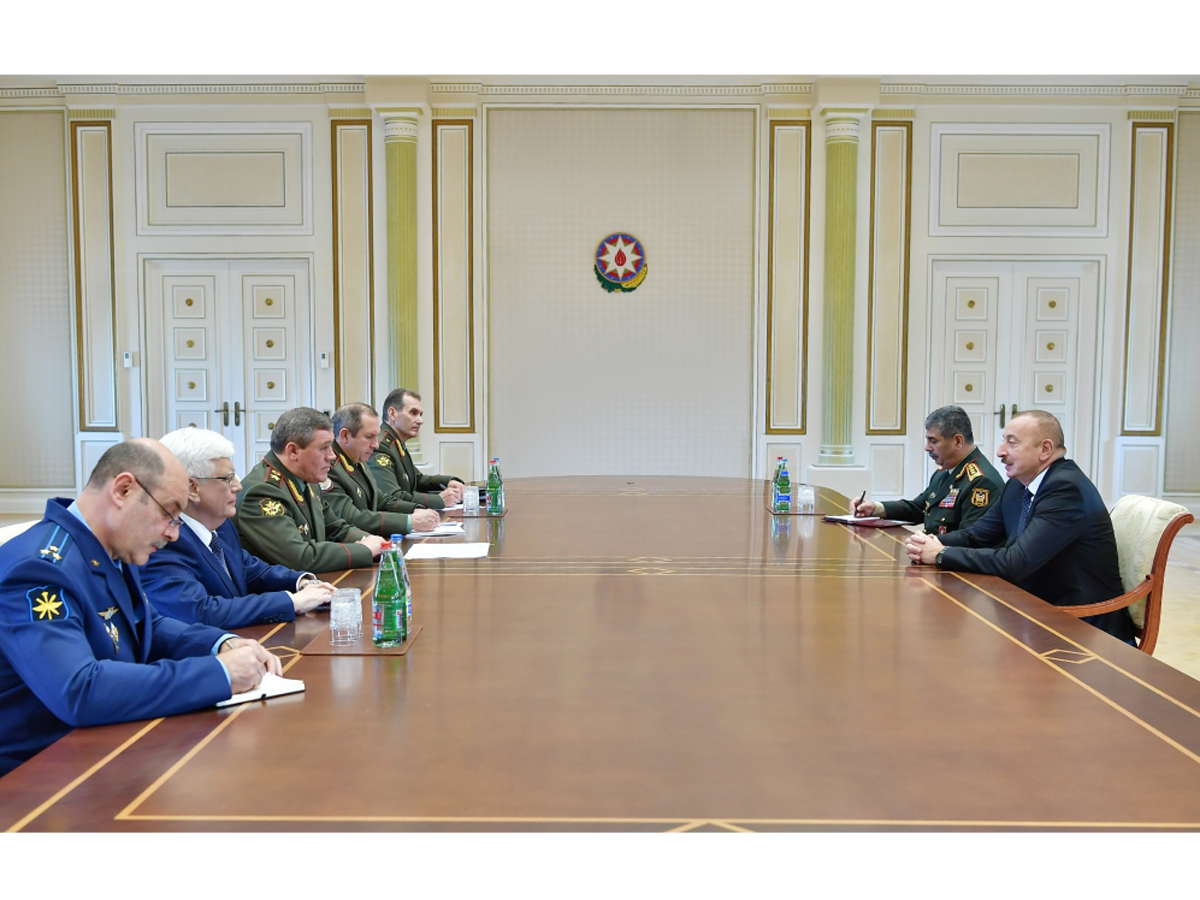 - Dear Valery Vasilyevich, dear guests! I am very glad to see you again. It has become a good tradition for the high military command of Russia and NATO to hold meetings in Baku. We truly appreciate that. Last year there were three such meetings and this year this is the second one. So this is a tradition that lives on and I think will be continued. We view this as a sign of great confidence in us. After all, many countries could be the venue for such meetings, but the fact that the choice fell on Baku and this tradition has been maintained for three years – the meetings began in 2017 – suggests that this place brings results. This is what we think.

Of course, I think that every meeting inspires hope. The security and peace not only in our region but also in the world depend on the agreements you reach. Therefore, of course, we take this with pride. We take this, again, as a sign of a very trusting relationship between us, which is confirmed by the long history of our relations that have reached the highest level in history.

Mehriban Aliyeva’s official visit to Moscow, which ended yesterday, once again confirmed the high level of our relations. We highly value this visit. We understand that this is an unprecedented situation in international politics when not the first person of the state is received at the highest level, by the president, moreover, by the president of the leading country of the world and the president who is number one among world politicians. I think that this is not only my opinion, but also the opinion of the overwhelming majority of leaders. And we very much appreciate the invitation, the level of relations, the decoration of Mehriban Aliyeva with the high Order of Friendship personally by the president and the words that followed. We appreciate all this, understand and, of course, are glad that the relations between our countries have reached such a high level.

Also, of course, meetings with the prime minister and the Chairman of the Federation Council were very constructive and eventful. Of course, the holding of an anniversary interregional forum and the opening of the Azerbaijan pavilion at the Exhibition of Achievements of National Economy are all very important steps in strengthening our ties. I am sure that the next year will be productive. And we will have a meeting with Vladimir Vladimirovich next month.

And of course, in the sphere you are engaged in we are also seeing a positive momentum. Your every visit to Baku is, among other things, an opportunity to once again discuss military cooperation, military-technical interaction which is developing very successfully, and to outline ways for further cooperation next year. We believe that there is an opportunity to build up the potential of cooperation in traditional and new areas between Russia and Azerbaijan. So welcome again. I wish you good results in the upcoming meeting.

The sides also discussed international and regional security problems, as well as topical issues of military and military-technical cooperation, and interaction of defense departments in the Caspian Sea.