Mr. President, first of all, I would like to express my deep gratitude to you for the invitation to visit Italy on a state visit and for the hospitality extended to me and the delegation. I am very glad to be in your beautiful country again. Today, both during our one-on-one meeting and in the negotiations with the participation of our delegations, I became further convinced that Italy and Azerbaijan are friendly countries very close to each other.

Mr. President, I recall with satisfaction your official visit to Azerbaijan. That visit gave a powerful impetus to the further cooperation between our countries and all the agreements reached during that visit are being implemented today.

There are plans to sign numerous bilateral documents today. Each of them is important. They cover many areas. However, I would like to emphasize the Joint Declaration on Strengthening the Strategic Partnership because this declaration essentially sets forth future directions of our strategic partnership. This is a very deep and detailed document covering political, economic, cultural, humanitarian areas – all areas. At the same time, it contains a provision on the provision by Italy and Azerbaijan of support to each other within the framework of international organizations. And this happens between close and friendly countries, between allies.

Further development of our cooperation in the economic sphere will be very positive. I am sure that we will now see cooperation of Italian companies in the non-oil sector. So far, many Italian companies have participated in various projects in Azerbaijan. As for trade, Italy is our number one partner on a global scale. Last year, our turnover reached $6 billion. True, a significant part of it relates to the oil sector. Therefore, we have exchanged views on the diversification of our trade.

As Mr. President said, we have discussed the settlement of the Armenia-Azerbaijan Nagorno-Karabakh conflict. Ways to resolve this problem are also stated in the Joint Declaration. It says that Italy and Azerbaijan respect and support each other’s territorial integrity, sovereignty and inviolability of borders. At the same time, it states the need to resolve the Armenia-Azerbaijan Nagorno-Karabakh conflict precisely on the basis of these principles, the Helsinki Final Act, decisions and resolutions adopted by the UN and OSCE. I believe that this is a very fair position based on international law, and we are grateful to the Italian side for this position.

As for the steps associated with a concrete solution to the issue, Armenia comes out with very disappointing, conflicting and contradictory statements. The head of Armenia once said that Nagorno-Karabakh is Armenia. Then he said that Nagorno-Karabakh is an independent state. Both statements are wide of the mark. Nagorno-Karabakh is Azerbaijan. This is evidenced by history, norms and principles of international law. The territorial integrity of Azerbaijan, including Nagorno-Karabakh, is recognized and accepted by the whole world. Therefore, the settlement of the conflict is possible only on the basis of the norms and principles of international law, within the framework of the territorial integrity of Azerbaijan.

Today, as Mr. President said, we also touched upon cooperation in the field of culture. We want to deepen cooperation in this area. There are plans to open a Culture Center of Azerbaijan in Italy. Several years ago, a monument to brilliant Azerbaijani poet Nizami Ganjavi was erected in the Villa Borghese park.

We have very fruitful cooperation in the field of education. There are plans to sign documents in this area too. Currently, more than 1,500 Azerbaijani students go to Italian universities.

With regard to energy issues, Azerbaijan is Italy's main supplier of crude oil. Azerbaijan accounts for 17 percent of crude oil consumption in Italy. For almost 15 years, Azerbaijan has been exporting crude oil to Italy, and there were no problems or force majeure circumstances over this time. So Azerbaijan has confirmed its reputation of a reliable partner.

As for the exports of natural gas, this project is also being completed. The implementation of the TAP project has reached 92 percent. This is the fourth and final project of the Southern Gas Corridor. Prior to this, three projects were implemented. Azerbaijan is located on one side of the Southern Gas Corridor and Italy is on the other. There is cooperation with five other countries located between us, so in total there are seven countries involved. This cooperation will also have a positive impact on the energy and all other areas, because these countries are closely connected with each other. After this, the development of political, economic and cultural ties between these countries will go even faster, of course.

The Southern Gas Corridor is a historic project, and I would like to express my deep gratitude to President Mattarella for the efforts made because during an official visit to Azerbaijan in July 2018, Mr. President and I talked about this. After that conversation, the implementation of TAP went faster, and we are currently at the final stage of the project.

The relations between NATO and Azerbaijan are developing successfully. Many years ago, we sent our troops to Afghanistan. Azerbaijan is actively involved in peacekeeping operations. We are providing very important logistical and transport services to NATO forces. Given the very favorable geographical location and transport infrastructure of Azerbaijan, we are successfully cooperating in this area.

So all the questions and thoughts that have been voiced clearly show that strategic partnerships and friendly ties have been established between our two countries, and these ties will successfully develop in the future. Thank you! 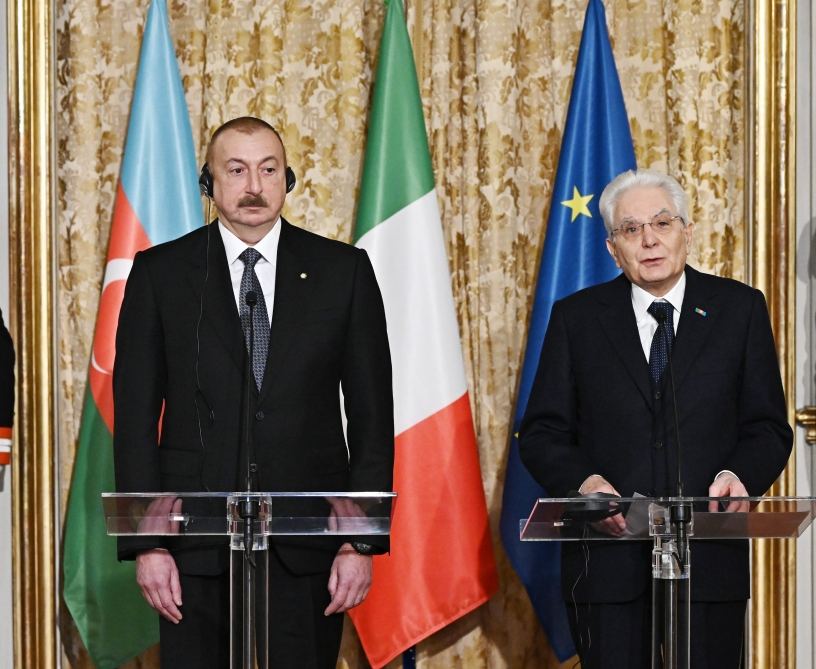