Association of Azerbaijanis of Finland issues protest due to Armenian provocation Association of Azerbaijanis of Finland disseminated a statement in protest against provocations of the Armenian armed forces on the state border with Azerbaijan, the Association’s Co-Chairman Arzu Oktay told Trend.

According to him, Armenia, which has continued to pursue its aggressive policy reflected in the country's security strategy against Azerbaijan for about 30 years, instead of eliminating the consequences of the Armenian-Azerbaijani Nagorno-Karabakh conflict, withdrawing the occupying forces from the internationally recognized territories of Azerbaijan, clearly disguised its intentions to seize new territories, create a new hotbed of tension on July 12.

"The Azerbaijani army, which, according to the instructions and requirements of the Supreme Commander-in-Chief Ilham Aliyev, is equipped with the most modern weapons, and is considered the most powerful army in the South Caucasus, as always, resolutely suppressed the provocation made by Armenian armed forces on the Azerbaijani-Armenian state border. The 2016 April battles have clearly demonstrated the level of combat readiness, fighting spirit of the personnel of the Azerbaijani army, the unity of the people and the army, our ability to free our lands from occupation,” the statement said.

“We, Azerbaijanis living abroad should unite around the Supreme Commander-in-Chief Ilham Aliyev, fulfill our civic duty in such a difficult moment for the Motherland, and not remain outside this war. There is a certain peak for every citizen of Azerbaijan - it is called the Motherland. We all took oath before it. Remaining faithful to our oath to our Motherland, we express our protest to all international organizations and urge the international community to give legal assessment to Armenia’s aggressive policy”.

The battles continued on the night of July 13, as Azerbaijan lost more soldiers, fighting off the Armenian army's attacks.

The battles continued on July 16, as one more serviceman of Azerbaijani army - Nazim Ismayilov was killed. 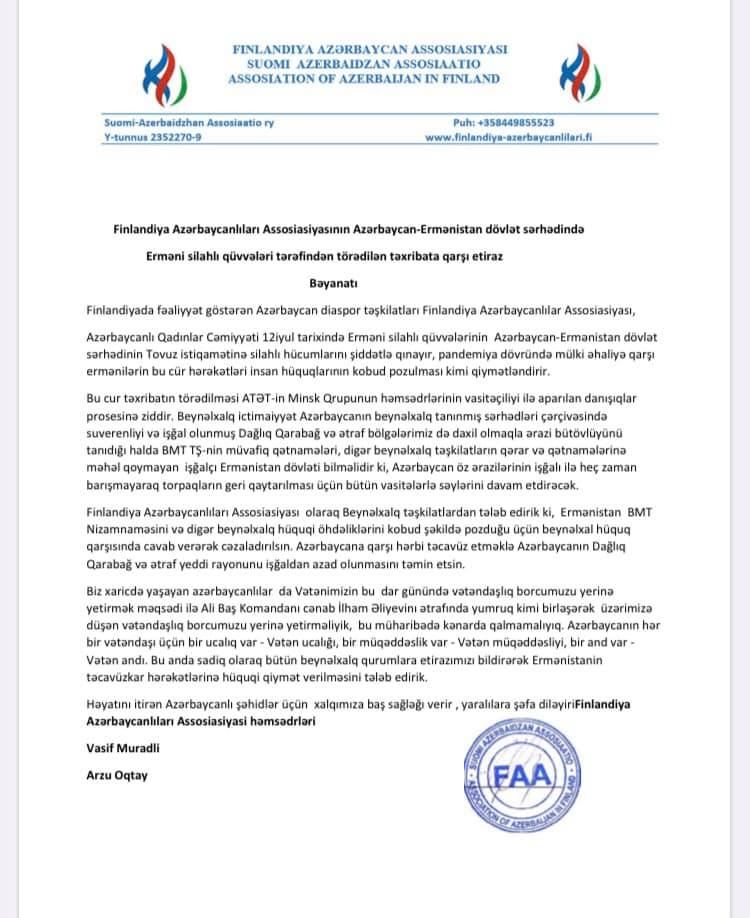