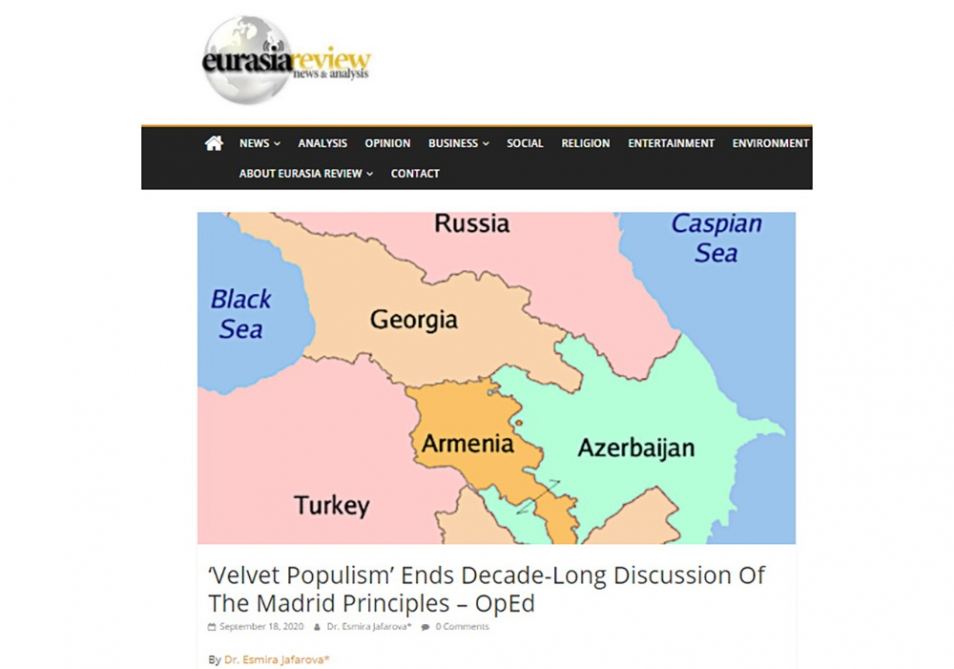 Eurasia Review portal has published an article by Esmira Jafarova, a Board Member of the Center of Analysis of International Relations of Azerbaijan, Trend reports.

"Recently, those observing the Armenia–Azerbaijan conflict witnessed another brick falling from the already shattered peace process. At the end of August, Anna Hakobyan, the wife of the Prime Minster of the Republic Armenia, Nikol Pashinyan, participated in publicized military training in the occupied territories of Azerbaijan; her targets, picturing Azerbaijani subjects, went viral on social media. This happened only one year after her famous call for peace that saw her pictured with a bouquet of flowers in hand.

Reactions on the Azerbaijani side were rightly both confused and irritated – but also, somehow, acquiescent. Unfortunately, the July 12–14 clashes at the international border in the direction of Tovuz district of Azerbaijan, as well as the events preceding them and ensuing after this escalation, do not leave much room for optimism that the incumbent Armenian leadership will in any way commit to meaningful peace negotiations from now on.

In reality, the military posture of Pashinyan’s wife, as a gesture, is nothing new. In 2018, Pashinyan and his wife sent their son to serve in the occupied territories of Azerbaijan. The chain of purposeful provocations in regard to the Armenia–Azerbaijan conflict, instrumentalized by Armenia’s so-called ‘revolutionary’ leadership that ascended to power in mid-2018, have already dealt a serious blow to the peace negotiations.

The list of provocations and disruptive actions further include Nikol Pashinyan’s infamous ‘Karabakh is Armenia and period’ statement that was also coupled with the rejuvenation of a dangerous miatsum (unification) ideology in regard to the Nagorno-Karabakh region of Azerbaijan; the organization of the so-called ‘parliamentary and presidential elections’ in the occupied territories of Azerbaijan; and Pashinyan’s visit to the historical Azerbaijani city of Shusha in May 2020.

However, the real step towards halting the negotiations was taken in March 2020, when Armenia rejected the existence of any document at the negotiation table, despite both sides, under the auspices of the OSCE Minsk Group co-chaired by France, Russia and the U.S.A., working on the so-called Madrid Principles for the resolution of the conflict. Those Principles were first revealed in 2007 and revised in 2009.

Armenian Defense Minister David Tonoyan’s vow in early 2019 to wage ‘new wars for new territories,’ alongside Prime Minister Pashinyan’s attempts to revive the debate around the principles and clauses enshrined in the 1920 Treaty of Sevres, which was never ratified but encompasses Yerevan’s territorial claims towards Turkey, also became vivid testimonies to the lack of interest on the Armenian side for engaging in a meaningful conflict resolution process.

On the 100th anniversary of the signing of the treaty, at the Treaty of Sevres and the Armenian Question forum held by Armenian scholars at the National Academy of Sciences in Yerevan, Pashinyan specifically stated that ‘… the Treaty of Sevres is a historical fact and it remains such up to this day… historic justice was being restored, and favorable conditions were being created for the restoration of the economic and demographic potential of the Armenian people. Although the Treaty of Sevres was not fulfilled, it continues existing as a historic fact, our duty is to remember it, realize and preserve its meaning… .’

In early August 2020, Armenian nationalists also issued a declaration calling it a ‘document of powerful geopolitical importance,’ thereby laying territorial claims to both Turkey and Azerbaijan in pursuit of the ‘Great Armenia’ project.

Thus, the optimism once voiced on the part of Azerbaijani officials that this new leadership in Armenia could potentially replicate their much-touted ‘revolution’ in peace talks with Azerbaijan, engage in peace negotiations in good faith, and aim at working to attain restorative justice in the Armenia–Azerbaijan conflict, unfortunately turned out to be short-lived.

It now becomes exceedingly clear that where we stand today in terms of peace negotiations depends on where Armenia’s incumbent leadership has opted to sit. Lamentably, where they have currently opted to sit does not bode well for the conflict resolution process. Apart from recurring and dangerous military clashes, Yerevan has also already revealed repeated attempts to meddle with the already established formats and formulas in place since the OSCE Minsk Group mediation activity was formally authorized in 1992. Since March 2019, Armenia has spoken of the necessity of including the occupied Nagorno-Karabakh region as an independent party to the negotiations, an attempt that was denied by both Azerbaijan and the OSCE Minsk Group Co-Chairs.

Moreover, as noted above, Armenia also denies that the Madrid Principles-based approach to the resolution of the Armenia–Azerbaijan conflict that conditions the defining of the final status of the Nagorno–Karabakh region on the upfront withdrawal of Armenia’s occupying forces from the Azerbaijani territories was ever the subject of negotiations. The statement was rather blunt, remarking that ‘proposals that imply a phased version of the Nagorno-Karabakh conflict settlement submitted before 2018 are unacceptable for Armenia.’

Having expressed dissatisfaction with the increasingly militaristic and provocative posture demonstrated by Armenia, Azerbaijani officials and experts now believe that the so-called ‘Velvet Revolution’ in Armenia has already ended with the Pashinyan government pledging allegiance to ‘both [the] internal and international course and alliance[s] of the previous regime.’

The author of these lines also expressed cautious optimism sometime in April of this year that, against all odds, we could perhaps still hope that 2020 would be the year of a breakthrough in conflict resolution between Armenia and Azerbaijan. We are now well into September and, with little more than three months remaining to the end of the year, it is no longer easy to entertain hopes that any progress could be forthcoming.

Apparently, the Pashinyan government has done its best to ensure that progress remains stalled – for today, and until common sense takes over from the provocative and short-sighted foreign policy that it has inherited and rigorously pursued. This also means that Armenia’s self-imposed isolation from all regional initiatives and projects will continue, alongside its economic predicament.

Only two years on from the so-called ‘Velvet Revolution,’ we can conclude that even this ‘velvet façade’ cannot hide the nationalistic policies pursued by Armenia’s leaders, who survive on the exploitation of historical and regional sensitivities without giving a second thought to the consequences of their actions – for their nation, and for greater regional security."