The exceptional civilizational significance of multiculturalism was discussed, with special emphasis on the centuries-old experience of coexistence of different cultures and traditions in Bosnia and Herzegovina.

The Chairman of the Presidency of BiH said that Bosnia and Herzegovina, although not a large country in terms of territory and population, is one of the most important countries in the world, due to its multiethnic and multicultural paradigm.

Serageldin, who served as vice president of the World Bank and director of the Library of Alexandria, stressed the great importance of Bosnia and Herzegovina's experience in the recent past, and said that the war BiH went through and the genocide committed, as well as the huge progress in BiH's reconstruction made in the post-war period, they should be something from which the whole world will learn lessons.

Chairman Dzaferovic thanked for the recognition, and said that it was an honor and pleasure for him to cooperate with the International Center "Nizami Ganjavi", and that he considered it to be an extremely serious and respectable platform for international cooperation, supported by HE Ilham Aliyev, President of the Republic of Azerbaijan.
The meeting was also attended by the President of the Society of Common Values Foundation and a member of the International Center "Nizami Ganjavi" Zlatko Lagumdzija. 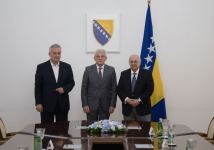