BAKU, Azerbaijan, August 23. Teams participating in the ‘Sniper Frontier’ contest being conducted as part of the "International Army Games-2022" in Yazd city, Iran, completed tasks in the next stage of the competition, the Azerbaijani Defense Ministry told Trend.

Azerbaijani snipers have successfully completed the task in 'Operations in the city' and 'Regulation' of the 'Pair scoring' stage of the contest.

During the contest, Azerbaijani snipers in pairs successfully completed the tasks of choosing a firing position and detecting and destroying targets located at different distances. 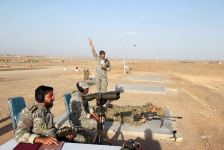