“The manufacturing company is preparing to put up the fire trucks for sale,” Mammadov added.

"The fire engine has been assembled on the chassis of an all-wheel-drive truck of the MAN brand,” the chief service manager added. “The entire fire engine structure is domestically produced. The fire engine has been equipped with a powerful high-pressure pump system. It is simultaneously capable of extinguishing a fire with both water and foam. It also has the ability to pump 3,000 liters of water per minute".

Mammadov stressed that the fire engine, which is intended for use only in the city, has already been tested.

“The wheelbase of the fire truck with a 299 horsepower engine is 3,860 mm while the total weight is 14 tons,” Mammadov said.

“The operational vehicle is intended for a three-person fire brigade,” the chief service manager said. “It has a 2-ton tank and a 450-liter foam tank. So far, mass production of the fire truck is not envisaged, but if there is such an order, it can be launched.” 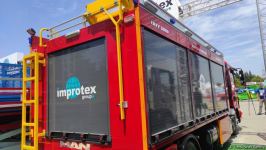 Uzbekistan to receive another batch of AstraZeneca COVID-19 vaccine