The Institute of Archeology and Ethnography of the National Academy of Sciences of Azerbaijan (ANAS) disclosed the preliminary results of archaeological researches on the territory of the ancient settlement of Lalatapa dating back to the Neolithic era, Trend reports citing ANAS.

The researches were carried out by the Karabakh Neolithic-Eneolithic expedition headed by Khagani Almammadov, leading scientific employee of the institute’s department of archeology of the Eneolithic and Early Bronze period, Ph.D. on History.

The settlement is located in the administrative territory of the village of Horadiz, Fuzuli district.

The ancient settlement in the form of a mound with a height of 6.4 meters, an area of ​​which is 0.9 hectares, was registered by the mentioned expedition in 2019. Archaeological excavations, which began in 2020, continued in 2021.

During the excavations, which were carried out on four sites with an area of ​​16 square meters each, a wall and the ruins of three structures were discovered, which had an oval, round and rectangular shape and dating back to the first half of the 6th millennium BC.

In the central part of the settlement, there was found a ziggurat (akkadca siqquratu - a multistage temple typical for the architecture of Ancient Mesopotamia, Assyria and Babylon). The ziggurat was built of raw bricks and has a conical shape. To the south of it, a cone-shaped structure with a diameter of 3.3 m and a height of 1.5-2 m was discovered. Here were found two jugs, various tools made of bone, and dishes. A swaddled child's skeleton was also found under the ruins.

The most interesting is the burial on the territory of the ancient settlement. A similar burial of the Neolithic period in the South Caucasus was first encountered in Lalatapa.

Eight graves with 14 human skeletons have been found on its site of approximately eight square meters. Presumably, seven of them belong to children, three - to teenagers, and four - to elders. Malachite and stone beads and bone ornaments were found next to the skeletons.

Almammadov said that the bone samples were sent to the Turkish Hacettepe University for DNA analysis. Thus, specialists will be able to study the genetics, heredity, diseases, and diet of ancient people.

According to him, DNA analysis is of particular importance in terms of studying ethnic and cultural changes that took place in the territory of Karabakh during the Neolithic period. 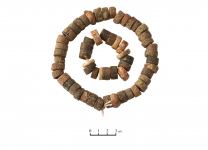