Construction and installation work is being completed at the metro station, which is being built on the territory of the electric depot in Baku's Khojasan settlement, head of Azerbaijan’s Baku Metro CJSC Bakhtiyar Mammadov said, Trend reports.

Mammadov said that it will become the 27th station of the Baku Metro, including the second ground station.

“The length of the platform, designed for trains consisting of seven railcars, is 144 meters,” the head of Baku Metro added. “Construction and installation work has been completed. Tiling will begin here soon.”

Mammadov said that the platform and the entrance to the station will be connected by a 59-meter passage.

“The escalators were installed,” the head of Baku Metro said. “Most of the cladding work has been completed.”

“The floor covering of the station will be made of Italian and Ukrainian granite,” Mammadov said. “The tiling of station lobby with a total length of 165 meters and service premises is under completion. The Khojasan metro station will be commissioned soon.” 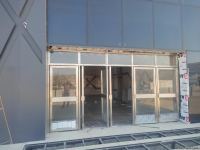