Azerbaijani-German relations have grown this year, Samir Veliyev, the Azerbaijani Ministry of Economy and Industry Administration Chief said on Friday speaking at the conference "the training of business managers: Azerbaijani-German cooperation" held in Baku.

"Today's conference is an example of success in our cooperation. It is multifaceted and covers trade, finance, investment, personnel training and other topics. A memorandum of cooperation was signed between the Ministry of Economic Development of Azerbaijan and the German International Cooperation Agency GIZ in 2009. in accordance to this memorandum, a joint Azerbaijani-German program for improving business management skills," Veliyev said.

According to him, this program is successfully being implemented and uses great demand among the Azerbaijani entrepreneurs.

"During the five years of implementation, about 173 people used it. Taking into consideration a high attention to this program, there was adopted a decision on its extension for another three years in February2013," Veliyev said.

According to him, one of the priorities of the modern policy of the Azerbaijani leadership is the development of business and investment climate in the country.

"From this point of view, the importance and significance of the joint program on improving the managers' skills will increase even more. I am confident that this program will serve to the further development and strengthening of cooperation between Azerbaijan and Germany," Veliyev added.

Representatives of Germany's Federal Ministry of Economy and Industry, the Azerbaijan Employers Confederation, the German embassy in Azerbaijan, GIZ, as well as entrepreneurs and managers who participated in the program of improving the managers' skills in 2009-2013, also took part in the conference organized by the Baku Business Training Centre with the support of the Ministry of Economy and Industry. 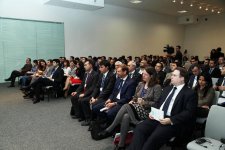