Citizens in Guba, Gazakh, Barda and Terter have contributed time and money to build six feed-grinding and seed-cleaning facilities that will provide services to nearby farmers. These facilities were built through the Socio-Economic Development Activity (SEDA), funded by the United States Agency for International Development (USAID).

The three new facilities in Guba and three in Gazakh, Terter and Barda will allow local farmers to make their own affordable animal feed for their cows and poultry and clean disease-free seeds for planting crops. They no longer would need to travel long distances to the nearest city to grind their clover, corn, and barley crops into feed and purchase seeds. These facilities will benefit nearby communities - home to 27,000 people - whose livelihoods depend on agriculture.

These projects are part of collaboration between USAID, the Azerbaijani government, and local communities to support citizen-led efforts to improve rural livelihoods. USAID’s SEDA is implemented by the East-West Management Institute with support from the Ministry of Economy. Since 2011, SEDA communities have implemented 134 projects that include activities supporting local economies, medical facilities, roads in rural areas, water and irrigation systems, and local school renovations -- benefiting nearly 220,000 people in 107 communities. 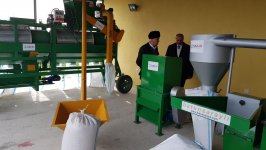