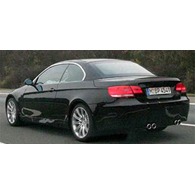 (autoinsidernews) - With the amount of testing BMW is putting prototypes of its next-generation M3 through, there have been no shortage of spy photos. Now we have more spy images of the M3 in convertible guise, reports Trend.

The M3 in all its variants will be powered by a 4.0L V8, which is expected to deliver 420+ horsepower.

Despite plenty of testing, the production version of the M3 is not expected for nearly a year. BMW is expected to officially unveil the new M3 at the Frankfurt Motor Show in September 2007.