Oil&Gas Materials 11 August 2013 20:43 (UTC +04:00)
The Trans Adriatic Pipeline (TAP) provides the best and most attractive conditions for investors, and we are very glad that this project was selected in a fair competition, Azerbaijani President Ilham Aliyev said at a joint press conference with Italian Prime Minister Enrico Letta in Baku on Aug. 11.

The Trans Adriatic Pipeline (TAP) provides the best and most attractive conditions for investors, and we are very glad that this project was selected in a fair competition, Azerbaijani President Ilham Aliyev said at a joint press conference with Italian Prime Minister Enrico Letta in Baku on Aug. 11.

President Aliyev underscored that the energy cooperation will open a new page in relations of Azerbaijan and Italy, adding that it will play an important role not only for bilateral relations but also for relations between the EU and Azerbaijan.

"Our energy projects will provide energy security for Europe, and at the same time, open new big markets of the European Union for us. We have huge oil and gas reserves, we have already diversified supply routes, but of course we are looking for the big markets and long-term cooperation," he said.

The President underscored that Azerbaijan, as a neighbor to Europe, as a country which is involved in some European programs, considers energy cooperation as an important element in its relations with European institutions, and the EU.

"We would like to see many more italian companies in Azerbaijan to work as investors, as contractors, and the delegation of Italian industrial team is expected to be here soon. I think we will find a lot of interesting projects," President Aliyev underscored.

The President went on to note that the relations between Azerbaijan and Italy develop very successfully, as the countries have good political ties, and the visit of the Prime Minister is a good indication of that.

"Azerbaijan and Italy cooperate actively in international organizations, and strong political contacts, of course, play an important role in diversification of our relations," he said.

"I can tell that Italy is our main trade partner, mainly of course because of oil supplies, and as a result of the Prime Minister's visit, and the discussions we had, we have diversification in our trade relations," he said.

President Aliyev also expressed his gratitude to Italian Prime Minister for support of cooperation between the EU, NATO and Azerbaijan.

Further on, the Azerbaijani President said that the sides discussed the issue of regional security.

"I informed Mr. Prime Minister on the occupation of the Azerbaijani lands by Armenia. The conflict around Nagorno-Karabakh has not yet been resolved. International organizations adopted numerous declarations, resolutions and decisions, and the soonest resolution to the conflict based on international laws and territorial integrity of Azerbaijan will of course create better situation in our region," President Aliyev said.

"Regional cooperation is very important here. Azerbaijan plays its role, because it is a Caucasus country, a country of the Caspian, and strong connections to Europe," the President noted, adding that hopefully in the future better results will be achieved.

The President noted that expanding non-energy sector and diversifying economy is one of the main priorities of the Azerbaijani government.

"It is our common understanding that we need to expand our economic cooperation," President Aliyev said.

He went on to note that energy sector plays, and will continue to play an important role, especially during the implementation of TAP project.

"I am sure a lot of new opportunities will emerge," the President said.

"For us, Italy can help to implement the project of diversification. We are looking forward to receive the industrial delegation from Italy, and at the same time we will have a meeting of inter-governmental commission," President Aliyev noted.

"We will see where we can find good areas for cooperation," the President said. "I can name several such areas - construction, tourism, agriculture, and creation of new industrial sites in Azerbaijan is also on our agenda," the Azerbaijani President said.

The President went on to underline the participation of Italian companies in infrastructure projects, which are being implemented in Azerbaijan.

"I am sure that while we are implementing TAP and increasing the level of co-operation in energy sector, at the same time we will concentrate on the non-energy sector of our economy, in order to diversify our trade relations and establish even better relations between our countries and our people," he said. 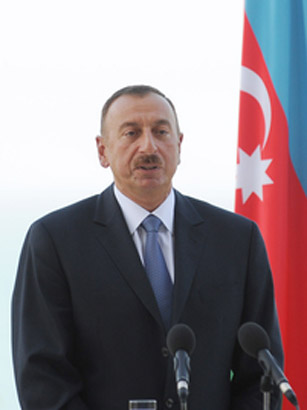