Azerbaijan will join the International Energy Charter, Energy Minister Parviz Shahbazov said at a briefing after the Energy Efficiency Conference in Baku on March 15.

Shahbazov handed over a corresponding letter of accession to the Secretary General of the International Energy Charter, Urban Rusnak, at the Energy Efficiency Conference.

The minister further noted importance of a bill on effective energy use, discussed at the Conference, and its importance for the future of the Azerbaijani economy.

"The bill on effective energy use will be reviewed by experts and relevant state structures, after which it will be submitted to the parliament for ratification," the minister said. 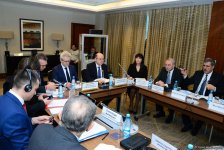