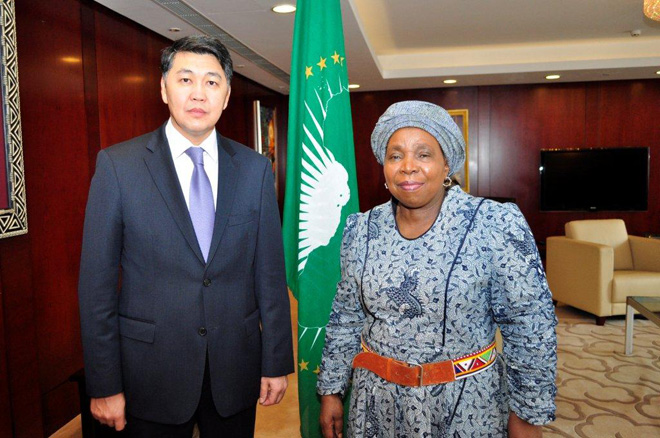 Kazakh ambassador to Egypt Berik Aryn met with the Chairperson of the African Union Commission Nkosazana Dlamini-Zuma in Addis Ababa (Ethiopia) yesterday. A letter of Kazakh Foreign Minister Erlan Idrisov about Berik Aryn's appointment the Permanent Representative of Kazakhstan in the African Union was handed to the Chairman of the Commission at the meeting, a message from Kazakhstan's Foreign Ministry said.

The message said that according to African Union regulations, by accrediting its ambassador, Kazakhstan gained an observer status in this influential international organization. the relevant appeal of Kazakhstan was submitted to the African Union Commission in May 2013.

Over 70 countries and international organizations have observer status in the African Union. Russia, the U.S.,China, Japan, as well as the European Union, UNICEF, International Committee of the Red Cross and others are among them.

The observer status in this influential and effective regional institute gives Kazakhstan new opportunities for the development of mutually beneficial trade and economic relations with African states and significantly expands the geography of promotion of the country's foreign policy initiatives in the international arena, the message said.

According to the message during the meeting with the Kazakh diplomat, Zuma stressed that Kazakhstan's accession to the African Union as an observer opens wide prospects for intensifying the relations of the continent countries with Astana and contributes to the establishment of interregional cooperation between Africa and the Central Asia.