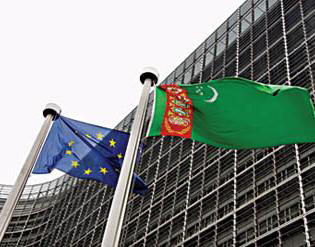 At the meeting of Turkmen President Gurbanguly Berdimuhamedov with representatives of international organizations accredited in the country, Charge d’Affaires of the EU Liaison Office in Turkmenistan Lubomir Frebort expressed gratitude for supporting the development of relations with the EU, Trend reports with reference to the Turkmenistan State News Agency.

The EU and Turkmenistan are committed to implementing a project designed to bring Turkmen hydrocarbon energy carriers to European markets. The negotiations have been underway since 2011.

The project of laying a 300-kilometer gas pipeline along the bottom of the Caspian Sea to the shores of Azerbaijan is optimal for the delivery of Turkmen gas to the European market. Further, the Turkmen gas can be delivered to Turkey, which borders with European countries.

At the German-Turkmen business forum held recently in Berlin, the issue of the prospects for Turkmen gas to enter the EU markets was raised. Head of the Turkmengaz State Concern Myrat Archayev said that the East-West gas pipeline that was commissioned in 2015 connected the gas-rich eastern regions of Turkmenistan with the west of the country and the Caspian coast.

In addition, oil and gas resources are being developed in the Turkmen part of the Caspian Sea at accelerated pace, he said. With the participation of foreign investors, four projects are being implemented offshore and three onshore, he added.

“We are fully prepared to sell Turkmen gas in the European markets, only left to find the interested consumers,” he said.