The new jet was unveiled, and also made a test flight, in a ceremony attended by Iranian President Hassan Rouhani.

The twin-engined, two-seat jet can be used for short-time aerial support missions.‎

"Kowsar" is planed to be mass-produced in one-seat and two-seat models, the latter of which can be used for both military and training purposes. 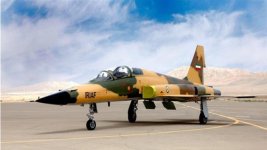