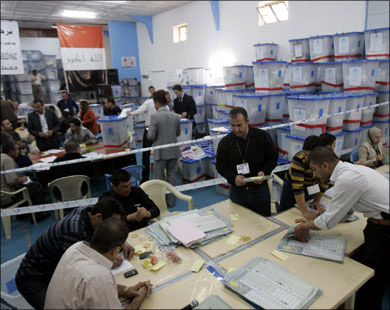 Iraq's electoral commission Friday rejected as "baseless" claims of fraud and ballot-rigging made by a leading member of the European Parliament, DPA reported.

At the same time, the Independent High Electoral Commission (IHEC) said it was "fully prepared to study any evidence provided in this regard, and to take action in accordance with the electoral law and regulations."

The IEHC's statement followed comments made this week by Struan Stevenson, a lawmaker who acts as the head of the European Parliament's Delegation for Relations with Iraq.

Stevenson spoke of "widespread cheating" which may have "fatally undermined the final result" of the March 7 election and which could "plunge Iraq back into a spiral of sectarian violence."

The Scottish conservative is seen as a fierce critic of the government of Prime Minister Nouri al-Maliki and of his State of Law coalition, and has accused it of manipulating the vote against former prime minister Ayad Allawi's Iraqi List.

The IHEC called such claims "surprising," saying they were made "without any evidence."

It said every step of its work had been conducted "on the basis of integrity, transparency, professionalism and justice" and noted that international monitors had supervised its work.