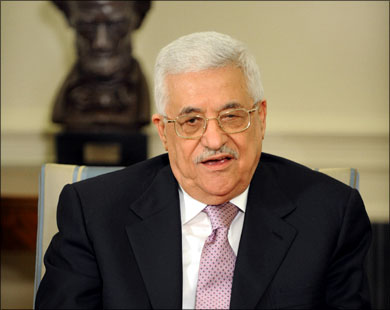 Palestinian President Mahmoud Abbas said in a string of interviews with Israeli media published Thursday that his people were losing faith in a two-state solution to the Arab-Israeli conflict, DPA reported.

Abbas, who hosted six Israeli correspondents for dinner late Wednesday, said that progress in peace negotiations with the government of nationalist Prime Minister Benjamin Netanyahu was moving too slowly.

"I too have a fragile coalition and a million more internal problems than Netanyahu," he said.

"We want to live in peace. Don't kill the hope," he added.

As part of the indirect negotiations the Netanyahu government, the Palestinians had submitted to US mediator George Mitchell their positions on the two key negotiating issues of borders and security.

But the Netanyahu government had yet to submit its position on those two issues and no answer was forthcoming.

"An answer of that sort is crucial for us to see whether we are speaking the same language," Abbas said. Had he been given any sort of answer, he would have been willing to resume direct negotiations with the Netanyahu government immediately, he added.

Two months into the indirect talks, Abbas said that "as soon as there is progress, we'll shift to direct talks, but up until now we haven't received even a single sign that might indicate progress on those issues."

The Palestinian leader spoke as Mitchell was in the region for another round of the indirect peace talks, meeting Netanyahu in Jerusalem Wednesday and Abbas in Ramallah Thursday.

International Bank of Azerbaijan completed 2019 with profit
Finance 17:39
Most popular