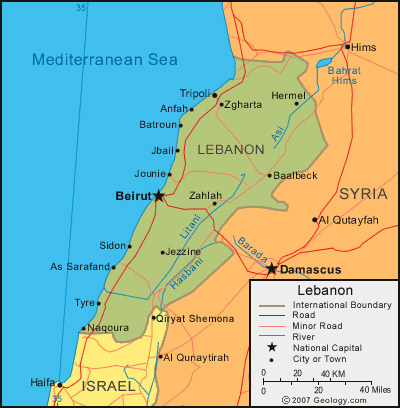 An explosion ripped through an area in the northern port city of Tripoli late Friday, causing panic hours after clashes broke out between armed Lebanese over Syrian President Bashar Al-Assad, a security source said.

The blast occurred near Al Jinan University in the mainly Muslim-Sunni neighborhood of Abi Samara, causing material damage and setting some parts of the campus on fire, the source, who requested anonymity, told dpa.

"Initial investigation showed that there is an arms depot in the area," the source said without giving details to whom this depot belongs.

Hours before the blast took place, clashes erupted between gunmen loyal to the Syrian regime and others who back the 11-month uprising in neighbouring Syria, injuring seven people, among them three Lebanese army soldiers, Lebanese police said.

Tripoli is dominated by Sunni Muslims, but it is also home to members of Al-Assad's Alawite minority sect.

Lebanon's Prime Minister Najib Mikati, who is currently on an official visit to France, called on the Lebanese army to intervene and halt the clashes between the rival factions.

The area where the clashes took place, has witnessed previous tension between the rival groups. Friday's violence came after hundreds of people demonstrated in Tripoli to condemn the crackdown by al-Assad against pro-democracy protesters in Syria.

The Sunni residents of Tripoli have been helping Syrian refugees who are fleeing to northern Lebanon to escape the violence at home that has claimed thousands of lives in their country.