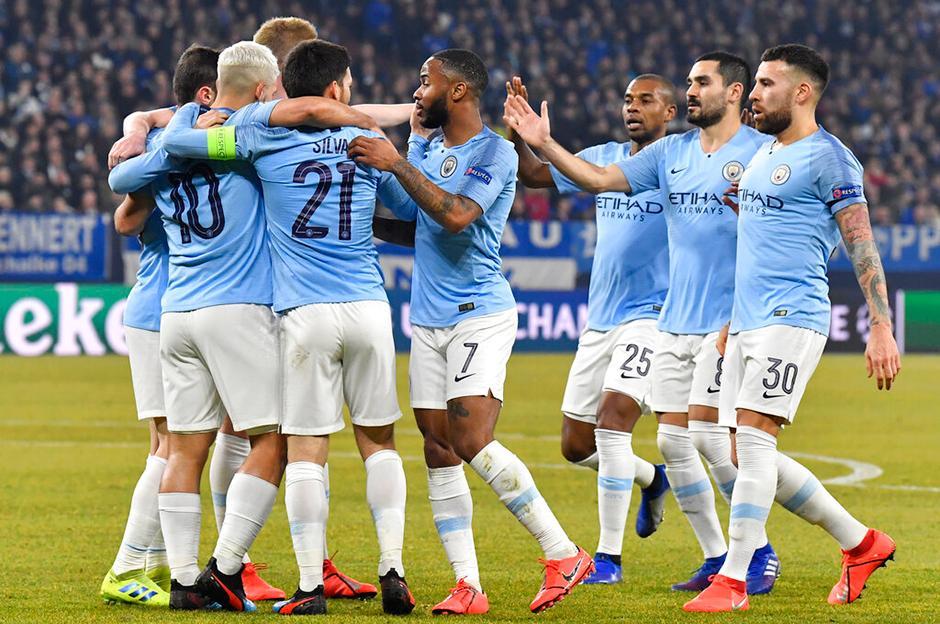 No team has scored more goals in the Champions League this season, and few will march into the quarter-finals with quite so much certainty as Manchester City who disposed of Schalke by the kind of aggregate score that felt like an embarrassment for the visitors by the end, Trend reports with reference to Telegraph.co.uk.

Ten goals over the two games, seven on the night and 26 in eight games for Pep Guardiola’s side who reduced their German visitors to a frazzled husk by the end of the game. The men from Schalke in high-viz green were dreadful on the night, caught in the glare, one had to suspect, of the reputation of their opposition as well as the memory of City’s last minute ten-man win in Gelsenkirchen two weeks earlier.

This might not have had the drama of their crosstown rivals’ miracle in Paris but it did have the looming certainty of a team very much tuned up for this competition. The two former Schalke players in the City team, Leroy Sane and Ilkay Gundogan, did much of the damage which will have been hard to take for the away side but this is the cruelty of the Champions League knockout rounds. City reach the last eight in Europe’s top club competition for only the third time in their history but never before with quite so much confidence.

The goals flooded in after a slow opening, and Schalke cracked badly as six City players shared the goals around them. The first two from Sergio Aguero and another for Sane before half-time did not prompt any great change of direction from Domenico Tedesco, the Schalke coach at the break, and his beleaguered players lost their way completely. Raheem Sterling, Bernardo Silva and then the substitutes Phil Foden and Gabriel Jesus scored the four after half-time against a team that barely knew which way was up by the end.

There was a role for the video assistant referee too, the Frenchman Nicolas Rainville, who presided over a clear evening in Manchester in which he took his time considering the decisions of the on-field officials. There were a couple of waits in the first half while he watched the replays and the rest of the attendees had to twiddle their thumbs. Rainville overruled his colleagues once significantly once, judging that Sterling’s fine volley on 56 minutes had been onside and a clear and obvious committed in flagging it otherwise.

It was over in the blink of an eye within seven first half minutes when City finally reached the speed of play that Pep Guardiola had in mind when he cajoled and berated his players towards the end of a largely uneventful opening half an hour.

As for Schalke, they were neither parking the bus nor trying to drive it at full speed through their illustrious visitors’ midfield. Their supporters had noisily occupied many of Manchester’s pubs and open spaces during the day but the team itself seemed only to creep into the Etihad Stadium.

There was no clear idea of what they were supposed to be doing – strange given that the tie was hardly out of reach - and once City found their mojo it was over.

Guardiola was frustrated at the pace of the football from his team, if not the levels of possession which were naturally high, up to 72 per cent by half-time. He wanted the ball moved with one or two touches and not the relatively ponderous pace that his side started with. In the end the strings were pulled by one of City’s two former Schalke players, the midfielder Ilkay Gundogan who played a role in all three of the first half goals.

It was his ball clipped over the top after half an hour for Bernardo Silva to run onto when the Portuguese playmaker felt an arm from Jeffrey Bruma thrust across his chest. The French referee Clement Turpin was slave to the video assistant referee all night, waiting for his own decisions – and those of his assistants – to be laboriously checked.

The penalty was clumsy from Bruma, a former Chelsea academy boy, and just about reached the benchmark. Aguero let the goalkeeper Ralf Fahrmann fling himself to his left before brushing a panenka down the centre of the goal.

Tough on the big German who was caught out couple of minutes later when Raheem Sterling racked up another assist with a backheel to the Argentinian who took the ball with his right and then poked a shot through the goalkeeper’s legs.

It will have disappointed the aspirational young Schalke coach Domenico Tedesco to see his side collapse so quickly, with Gundogan’s straight through-ball to Sterling catching his defence square. The same went for Oleksandr Zinchenko’s ball into the left channel for Leroy Sane three minutes before half time for the former Schalke prodigy to strike a left foot shot into the far corner. Again, the move originated in midfield with Gundogan.

The away side had mot managed a single attempt on City’s goal in the first half and they had failed to stay in the tie too. The only question remaining whether they came out after half-time and threw caution to the wind, or whether they wrapped their arms around a four-goal deficit in the tie and hung on for dear life.

After the break it was hard to see what approach Schalke had settled on. Sane had a goal disallowed for offside which looked marginal even if VAR let that one ride. Presumably no clear and obvious error could be cited. Then came the goals, first Sterling with a goal taken first time from the right channel. Then Bernardo Silva scored from the edge of the box from Sane’s cutback. Foden went round the hapless Fahrmann for six and the German goalkeeper dived over Jesus’s goal for the seventh. It was over long before the referee finally called time on Schalke’s miserable evening.