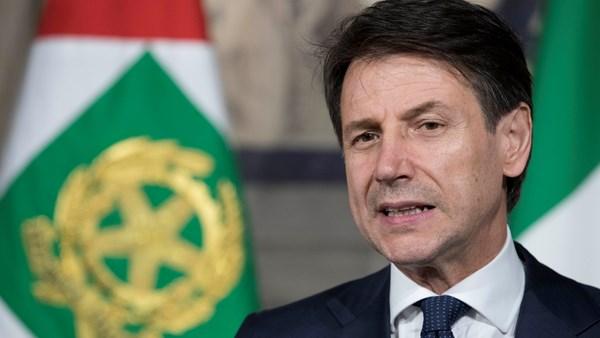 The eastern-based military forces led by Khalifa Haftar launched a military operation last week attempting to take over western Libya, the capital Tripoli in particular, where the UN-backed government is based. The government forces there have fought back.

The Haftar-led army is allied with Libya's eastern-based government. The politically divided North African country has been struggling to make a democratic transition amid clashes and chaos since the fall of former leader Muammar Gaddafi's government in 2011.

Italy supports the U.N.-backed government led by Prime Minister Fayez al-Sarraj. It opened an embassy in Tripoli in 2017, and sent a 300-member military task force as part of a "bilateral mission for assistance and support in Libya", according to the defence ministry.

Also in 2017, Italy struck a deal with the government led by al-Sarraj to stop people traffickers' boats loaded with migrants and asylum seekers from leaving for Italy, approved a mission to support the Libyan Coast Guard in the fight against migrant traffickers, and allocated six million euros (6.8 million U.S. dollars) for migrant detention camps in Libya.

"I have no reason to think that France could have interests other than in Libya's stability and full recovery," Conte told Il Fatto Quotidiano. "An unstable Libya certainly would not allow France to pursue possible national economic interests."

Conte was at pains to reiterate that the Italian government is united in its approach to the Libya crisis.

"I am personally coordinating the Libya dossier, which is strategic for Italy," Conte said. "Italy does not bet on one or the other player."

Conte also confirmed news reports that he has met with a delegation from Haftar recently in Rome.

"I confirm the meeting took place," he told Il Fatto Quotidiano. "They delivered a personal letter from General Haftar to me....They said they want to free the country from terrorist organizations and unify the armed forces and security forces. I reiterated my firm opposition to a military degeneration that would inflict further suffering on the civilian population. I reiterated my openness to keeping open every type of dialogue that could be useful to find a political solution."

Conte said he has spoken with German Chancellor Angela Merkel and that "she is also very concerned and shares our position, which is that the military option cannot be a solution."

"We will work together within the European Union (EU) to pursue a common policy and to avoid proceeding in a disorderly fashion," Conte said.

The al-Sarraj government is "the only government recognized by the international community" but "a solution to the conflict is unthinkable without dialogue with all the players - local or international - who play a role (in Libya)," he added.

"Haftar has always played an important role," said Conte. "This is why I involved him in the Palermo conference (in November 2018), I met with him in Benghazi, and hosted him in Rome."

Conte stressed his concern over a possible humanitarian crisis if the conflict in Libya does not abate, saying that while the violence might interrupt the flow of migrants into Libya from sub-Saharan Africa, "Libya could go from being mostly a country of migrant transit to one of departure."

Conte also said Italy's military contingent and embassy staff will "remain fully operational for now, but we are ready to intervene to safeguard their security at any time."

He was echoed by his defense minister, Trenta, who told Corriere della Sera newspaper in an interview also on Saturday that as far as Italian staff in Libya, "the evacuation plans are operational, we'll see how the situation evolves."

With regards to Salvini's aggressive remarks against France, Trenta said that "there is no need a showdown, there is no need to act tough as I see some doing just to grab a newspaper headline or two. What we need now is intelligence, composure, and dialogue."

Like Conte, the defense minister said that Italy "talks to all the players in the field as well as our international partners", and added that "France is our partner and friend, and I expect a country who is friend to act with fairness".

"There is excellent cooperation and healthy competition between France and Italy," Trenta told Corriere. "We do not work to damage each other, but it is normal that Italy should also strive to pursue its own interests."

"If anyone is thinking about military intervention in Libya, I can say the option does not exist," Trenta said. "And we will not back a hypothetical intervention by other countries."

The World Health Organization said dozens have been killed, hundreds have been wounded and thousands displaced by the fighting in Libya, and the UN refugee agency UNHCR, which said 9,500 people have been driven from their homes, on Friday called for the immediate release of over 1,500 refugees and migrants who are believed to be trapped in detention centers where hostilities are raging.